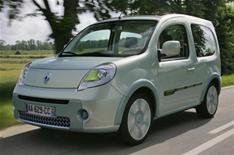 The Be Bop Z.E is a concept car. There's almost the same fragility to the cabin plastics and controls that you'd expect to find in a pure-bred Paris motor show design study with a dark hole under the bonnet.

Driving the Be Bop is less about dynamics than it is about considering how that all-important heart of the car - the battery and electric motor drivetrain will perform.

Gloss over the light steering and thumpy suspension and you're left with something that would be more than happy on the majority of daily commutes.

With a Renault caretaker, video cameraman and bags of gear on board, it was eager away from a standstill and at low speeds. The Be Bop Z.E is less responsive to the thump of your foot on the throttle at higher dual-carriageway speeds, though. You might need to anticipate a bit better, but it's not awful and can certainly reach motorway cruising standards.

The regenerative braking dive when you lift off the throttle is less obvious than in the Mini.