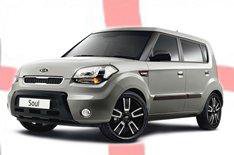 The football World Cup starts next month and along with the globe's top teams battling it out on the pitch, it also brings the chance of winning a car from Kia or Toyota.

Score with Toyota and Lexus
Four Toyota and Lexus dealers in Yorkshire are each stumping up an IQ supermini in another giveaway that's open to the first 1000 people who take a test drive.

It's a bit more complicated than the Kia competition, however, because the dealers are also asking entrants to guess the scores in each of the group matches England is playing against the USA, Algeria and Slovenia.

Winners will be selected at random in the event of more than four of the test-driving football pundits coming up with the correct scores. Visit www.wrmg-toyota.co.uk or www.lexus-bradford.co.uk for more information.

Come on England
Vauxhall has come up with England flag stickers and door mirror caps for the three-door Corsa if you want to get in the mood and show your support for the team.

The makeover is available from dealers now and costs 149 including VAT and fitment.