Which used Skoda Roomster estate should I buy?

The Roomster's engine options are a mixed bag. The 1.2-litre petrol unit (68bhp) is really too small for this type of car, the 1.4 petrol (85bhp) makes the most sense, but even then it's sluggish, needs to be worked hard and can boom at motorway speeds. The 1.6-litre petrol engine with 105bhp is quicker, but will cost you more to run, and isn't that common on the used market.

The diesel options aren't necessarily better. The 1.4-litre comes with either 69bhp or 79bhp, and a 1.9-litre with 103bhp - best if you intend to load your Roomster up to the gunwales.

Originally, Roomster trims were designated 1, 2, 3 and Scout, but in early 2009 the range was overhauled so that only three models remained: S, SE and Scout.

All Roomsters come with front electric windows, a CD player and MP3 player input, but mid-spec 2 or S cars have alloys and air-con and 3/SE trim has cruise control and parking sensors. The Scout comes with a different body kit, making it look like a baby off-roader, but is equipped similarly to an SE. 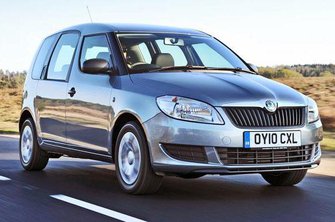