What used Toyota Corolla estate will I get for my budget?

How much does it cost to run a Toyota Corolla estate?

Insurance isn't too much of an issue with lower-spec T2 cars rated at group 5 and T3 trim attracting a group 6 rating.

And, the fuel economy needn't worry you, either. Toyota has always had a reputation for producing economical petrol engines and the 1.6-litre in the Corolla is no exception, with an official figure of 39.2mpg. The later diesel engine is a better bet than the earlier one as it returns 49.6mpg, as opposed to 47mpg.

The only time the costs don't look so great is when you have to take the car in for work. Servicing costs over three years are going to be higher than what you would pay if you were running a Ford Focus or a Peugeot 307 estate. However, you can cut your costs by choosing a diesel model, because its engine can run up 20,000 miles before it needs a service, whereas the petrol needs fettling every 10,000 miles.

Similarly, the average repair cost for a Toyota can be quite a bit higher than the cost of having a Nissan, Ford or Vauxhall rectified. 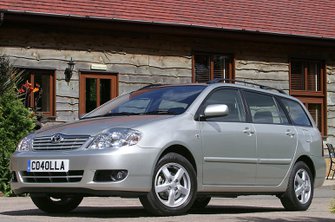