Like the regular Toyota Prius, the Plug-in has an interior that's quite striking. It looks high-tech and there are sections of trim that can be highlighted in either black or light grey, partnered with matching leather. Unfortunately, elsewhere you largely get hard plastics, and although Toyota does throw a few soft-touch surfaces into the mix, it would be nice to see rather more in a car this expensive.

The layout of the dashboard is unconventional, doing away with traditional instruments directly in front of the driver. Instead, there are a pair of 4.2in colour screens that sit atop the dash, slightly to the left of your sight line. The right-hand screen covers basics such as speed and fuel level, while the left shows secondary data, including a highly detailed fuel economy analysis.

In addition, all versions of the Prius Plug-in feature a head-up display that projects information onto the windscreen. This shows your speed, sat nav instructions and other info clearly in your line of sight, helping you to keep your eyes on the road.

Lower down, an 8.0in touchscreen operates the infotainment system, and it’s flanked by supplementary touch-sensitive control panels. But while these panels look good, they can be quite distracting to use on the move, and the touchscreen itself is a little slow to respond at times. It’s also disappointing you can’t have Apple CarPlay or Android Auto; this weakness puts Toyota’s system even further behind rivals.

While it's easy to find a comfortable position in the driver's seat, the steering wheel could use a little more range in terms of both vertical and horizontal adjustment. 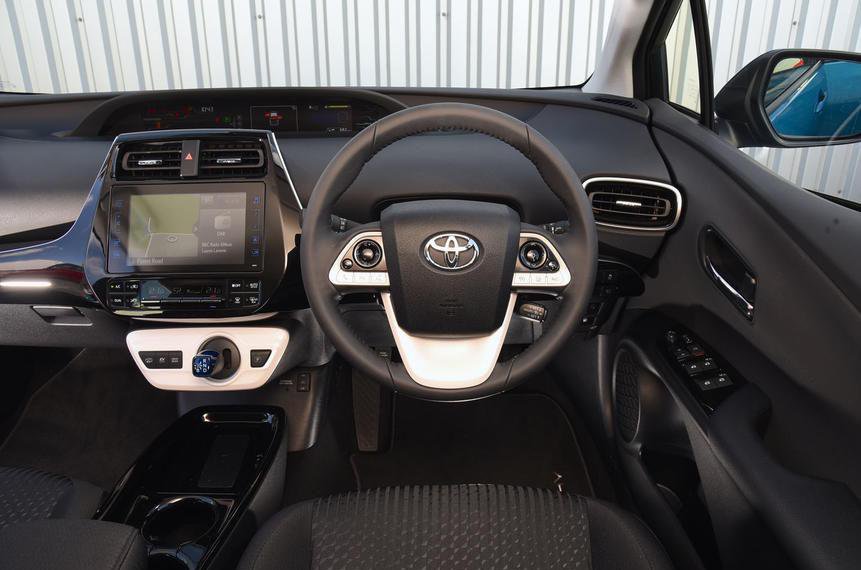