What should I look for in a used Vauxhall Mokka hatchback?

By being so explicitly aimed at families, cars such as the Vauxhall Mokka open themselves up to taking plenty of abuse. As a used buyer, it is therefore important to look carefully at the interior for signs of damage, as well as checking wheels and body panels for scuffs and dents. As rear visibility isn’t great, it’s also important to check for parking knocks at the back of the car.

Signs that the car has been well maintained include a full history and any invoices for work, and check if the tyres have plenty of tread left and oil and coolant are topped up to the correct levels.

The Mokka has been recalled three times in total, most alarmingly when a small batch of cars built in December 2012 were recalled because the steering wheel might detach due to a loose bolt. There was also a potential fault with the front seatbelt pre-tensioner on cars built until March 2013. Those built from April to November 2015 might have a faulty electronic connector that, in the worst case scenario, could lead to a vehicle fire. It’s worth checking that work has been carried out for any recalls affecting the car you’re planning to buy.

What are the most common problems with a used Vauxhall Mokka hatchback?

Diesel Mokkas use a diesel particulate filter that requires owners to undertake regular long journeys for the filter to regenerate. Fail to do this and you’ll face a bill for having the filter cleaned manually. So if you only ever drive short distances, it is best to stick with one of Vauxhall’s petrol engines.

For any Mokka fitted with Vauxhall’s integrated bike carrier, you also need to make sure it is folded away correctly to avoid damaging the rear lights.

Mokka owners seem to be a happy bunch, with no regular faults with their cars to report.

In our most recent reliability survey the Mokka and Mokka X proved more reliable as petrol-engined cars. Thus equipped they finished third in the small SUV class with an overall score of 97%, with just 9% of them having faults, while 27% of diesels had problems. Vauxhall as a brand finished in a highly respectable 11th place out of 31 manufacturers in the same survey. 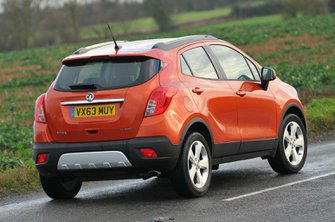