What used Volkswagen Jetta saloon will I get for my budget?

How much does it cost to run a Volkswagen Jetta saloon?

The Jetta may have a premium image, but the insurance costs are reasonable. Even the high-performance, 197bhp, 2.0-litre turbo is rated in group 15, which is two groups lower than the Golf GTI, even though the Jetta is pretty much as fast. Both, for the record, are rated at 35.3mpg.

The most economical Jetta is the 53.3mpg 1.9 TDI, but the 2.0-litre is not far behind, returning an impressive 48.7mpg. The entry-level 1.6-litre petrol returns 40.9mpg and is the cheapest of the lot to insure with a group 6 rating.

Like the Golf, the Jetta has variable service intervals, so the way you drive could save you money. Look after your car and it could run to 15,000 miles before needing fettling. Servicing costs are pretty to similar to what you'll pay for the Golf.

Neither are as cheap to look after as the Jetta's Volvo S40 saloon rival, though. The Swedish car is also marginally more economical and, due to its depreciation, less expensive to buy second-hand. 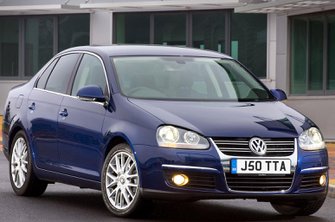