The first thing that strikes you is how simple the TT’s dashboard is; there is just a handful of clearly labelled buttons set neatly into the fascia. This minimalist approach is helped by the absence of any central infotainment screen.

Instead, a 12.3in digital instrument panel, which sits behind the steering wheel, shows everything from the sat-nav maps to your music collection, while also replicating traditional analogue dials showing speed, engine revs and other driving essentials. Audi calls this customisable display a ‘Virtual Cockpit’.

Drivers of most shapes and sizes will be able to get comfortable thanks to a standard front centre armrest and plentiful adjustment to the steering wheel and driver's seat. The manually adjustable seat of entry-level Sport trim proves supportive enough, but go for S line trim or above and you'll get an even more figure-hugging Super Sport Seat, with four-way lumbar adjustment included. Top-end Vorsprung trim adds an electrically adjustable driver's seat.

The TT’s sleek styling and high waistline restrict your view out a bit, but visibility isn’t too bad by coupé standards – especially out of the front.

Pulling out of junctions requires a bit of neck craning, though, and, while you get rear parking sensors as standard, front sensors and a reversing camera are part of the pricey Comfort and Sound pack on all but top-rung Vorsprung trim.

Sport trim comes with bright xenon headlights, while S line moves to even better LED bulbs. The Vorsprung versions go even further, with Matrix LED headlights that can remain on main beam virtually all the time, constantly shaping their light field to avoid dazzling the cars in front. 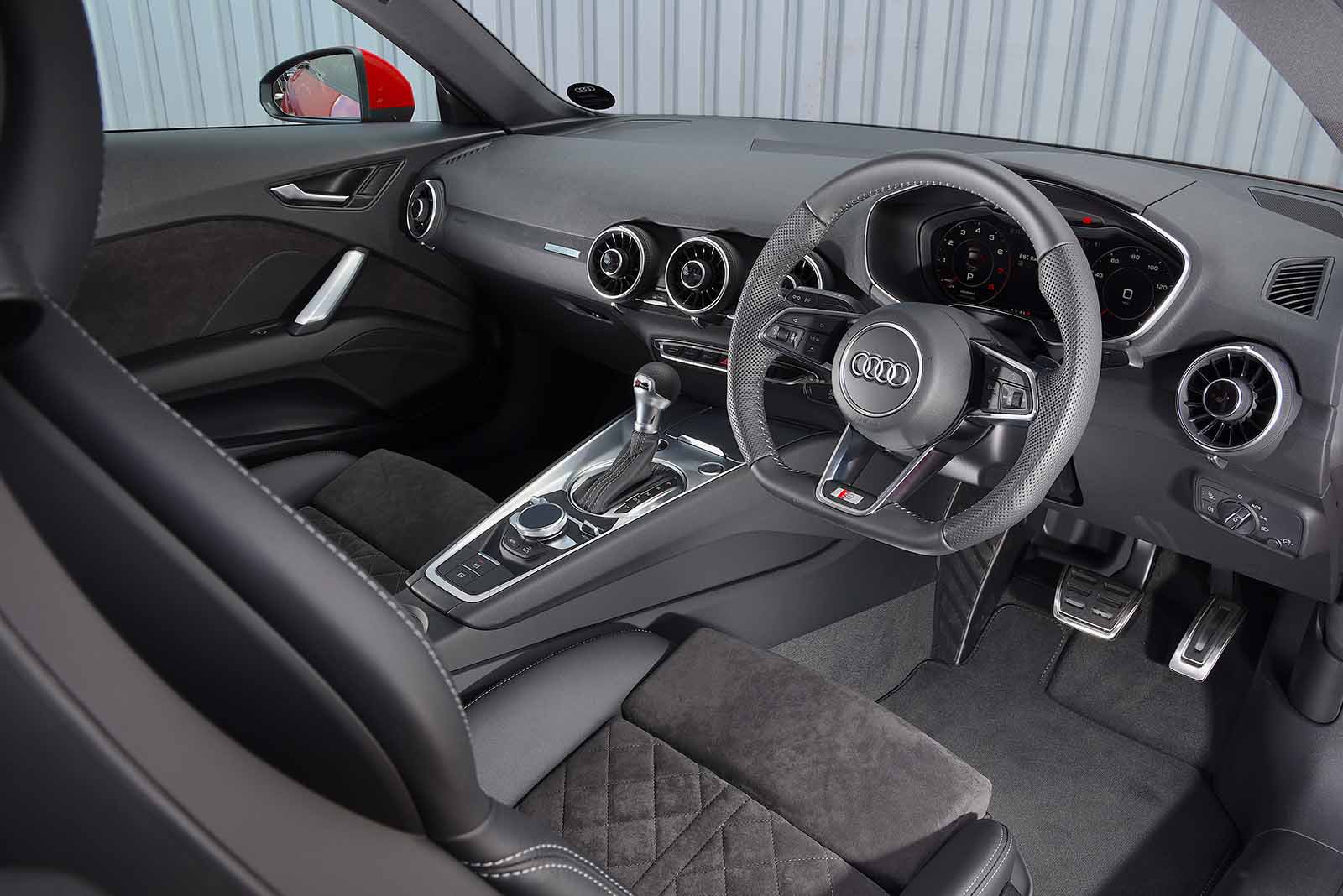 The fact that the infotainment screen is directly behind the steering wheel is good news in theory; you don’t have to divert your eyes far from the road to see it. However, it does make for a rather isolating design because the passenger can’t help out with the sat-nav or manage the music.

This setup takes a little getting used; its menus are condensed to fit into a fairly restricted screen space. However, the interface (a rotary controller that's positioned between the front seats) is much less distracting to use while you're driving than a touchscreen would be.

A DAB radio and a USB socket come as standard, but, disappointingly, sat-nav costs extra on the TT (it's part of the relatively pricey Technology Pack) on all but the range-topping Vorsprung trim (all versions of the more powerful TTS included it). It's also disappointing that the same situation applies to Apple Carplay and Android Auto smartphone mirroring, although you can't add it to the cheaper trims.

The TT’s interior really is something to behold, with solid-feeling, high-quality materials throughout. Even the buttons and switches all feel reassuringly weighty, operating with the precision of a Swiss watch.

In fact, the interior is so smart that it shames some far more expensive sports cars; even the Porsche 911 doesn’t look or feel significantly more special inside.