Which used Audi TT sports should I buy?

The Audi TT Roadster is not as stiff as the coupe, so don't opt for the most powerful version, as the open-top struggles to cope with the extra performance. However, we do think four-wheel drive is desirable, so the 1.8 T Quattro 180 is our choice. Its 180bhp engine provides strong acceleration but won't tie the chassis in knots. It's also cheaper to insure and easier on fuel than the more powerful units.

The 225bhp and later 240bhp versions are quicker off the mark than the 180 (or later 190), but there's not much difference. The 3.2 V6 is swift and sounds great, but, as on the stronger four-cylinder models, the extra performance is hard to justify for the added cost.

The 150bhp (latterly 161bhp) front-drive Roadster offered a cheap way into TT ownership when it was new, and continues to do so in the used market. However, it had less standard equipment than the four-wheel drive models, so we'd only buy one fitted with optional leather seats. 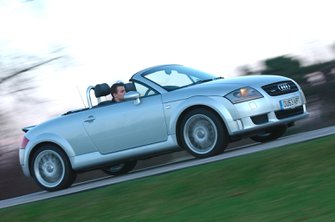