This BMW 7 Series was the first model to usher in the brand's new-age styling. Some praised its boldness, but to others it just looked weird. BMW responded by softening the car’s lines as part of the 2005 facelift.

It’s a very big car, particularly if you go for the long-wheelbase version. Whichever 7 Series you choose, however, the interior is huge and lavishly equipped, and the boot enormous but rather awkwardly shaped.

Many of the gadgets are controlled using BMW's iDrive infotainment system, which is operated by twirling and clicking a big silver dial between the front seats and following menus on a screen set into the dashboard. BMW improved iDrive massively for subsequent models, but here it's overly complicated.

The speed-sensitive steering is accurate and body lean is well controlled without impinging on comfort. It makes the 7 Series a fine cruiser and surprisingly enjoyable to drive by luxury saloon standards, but a Mercedes S-Class is quieter at speed. 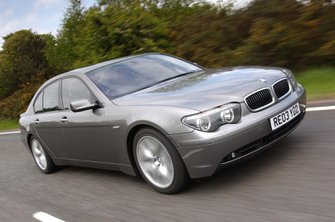