The BMW Z3 is a handsome two-seat convertible that sells quickly, even at high prices.

The upmarket image is everything you'd expect of a BMW, but the same can't be said of the drive; the suspension set-up is basically a 1980s design, so the Z3 feels stiff and slow-witted compared with a Mazda MX-5, and a lot less fun.

However, the engines and gearboxes are as good as you'd expect. The most popular 1.9-litre engine found in most Z3s isn't sports car-quick, but it suits the car well enough. The 2.8- and 3.2-litre units are much more powerful, but they show up the limitations of the chassis only too obviously.

Like the suspension, the interior, is showing its age, but at least it's well screwed together. It's well equipped, too, and its terrific seats are very comfy, although they're not great for long-legged drivers. Boot space is tight. 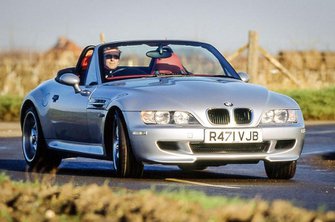