It might seem like an oxymoron to describe a car as being a fun hybrid – at least it is when talking about traditional hybrids. They often take too much of the driving experience away because the computer decides which motor to use to save fuel. Not so the Honda CR-Z.

For starters, this hybrid is a manual, whereas its contemporaries usually use automatics – or, rather, constantly variable transmissions, or CVT for short – as a way of getting the engine’s power to the wheels.

But the Honda CR-Z hybrid system is different because the electric motor is more of an assistant to the engine. The battery pack beneath the boot floor is charged by regenerative braking and then sends power to the integrated electric motor that provides an extra bit of shove to the wheels when you need it. It’s a lightweight, compact system, which means it can be made to fit in a small car like the CR-Z. The engine also utilises a start-stop system to switch off the engine in traffic to cut emissions and help increase fuel economy. There are three driving modes, which alter the throttle mapping and driving characteristics depending on your mood. And there’s an Eco assist gauge that helps to coach you into better, more economically minded driving habits.

The hybrid motor’s compactness means the CR-Z can retain its manual gearbox. This gives the car an added layer of driver involvement missing from its peers. The problem is, while some of its hybrid rivals can run on electric power alone, the compact design of the CR-Z's drivetrain means it doesn’t have this ability.

But the CR-Z isn’t just a hybrid. First and foremost, it’s a sports car – and, in that regard, the CR-Z makes much more sense. Thanks to its compact size and neat handling, the CR-Z can be quite good fun to hussle down a country lane. The trade-off is a rather firm ride, which also doesn’t help things on the motorway as it can feel nervous at speed, and you will also be bombarded by wind and road noise. It’s not a car suited to a long-distance road trip, unlike some of its sports car rivals such as the Audi TT, which manages to keep a foot in both camps by being both enjoyable to drive when you want it to be and hushed in everyday situations. But what the CR-Z does do is bring the around-town fuel economy and eco-friendly nature of a hybrid to a car with a huge dollop of character. 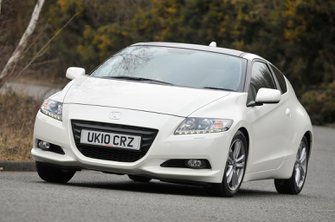