It's a funny-looking little thing, but if you're considering a Hyundai Atoz, then style may be pretty low on your list of priorities. More than likely, bargain-bin motoring is at the very top.

On that score, the Atoz isn't a bad idea. You can pick one up for next to nothing, and for your nominal investment you'll get a roomy little city car with great visibility that will happily buzz around city streets.

That's about where its merits end, though. The cabin is bland and uninspiring, while the out-of-town drive is worse than lacklustre. Body roll is very pronounced on B-roads, and the limited top-end power means that motorways should be no-go areas. The ride is poor at speed, too, and the word refinement isn't in the Atoz's vocabulary. 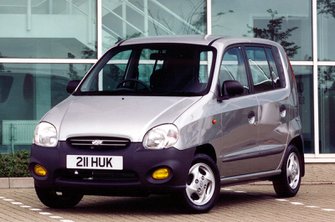