It’s easy to get comfortable behind the wheel of the XF. Even entry-level S-grade cars come with heated 12-way, electrically adjustable front seats (with adjustable lumbar support), while stepping-up to R-Dynamic SE or HSE trim nets you 16-way electric sports seats with a memory function – this lets you save your preferred seat settings and recall them at a touch of a button.

No matter what trim you opt for, though, the driver seat lines up nicely with the pedals and steering wheel. Our only minor grumble is that the steering’s telescopic adjustment range is a little short for driver’s over six-foot.

As standard, you get clear analogue dials, but go for an R-Dynamic model or tick the option box for Jaguar’s ‘Interactive Driver Display’ and these are replaced by digital dials on a 12.3in screen. They put a wealth of useful information just below your sightline and make the optional head-up display a worthwhile extra rather than an absolute must. Meanwhile the rest of the dashboard is well laid out and easy to get the hang of, with physical buttons for the climate control and media volume. That’s not the case with the Audi A6, which uses a touchscreen for the climate controls, and, while that looks great, it's distracting to use while driving.

The driver will have no problems seeing out of the front of the XF. Its thin windscreen pillars mean very little is obscured at junctions. Similarly, the front side windows are deep enough that roundabouts and T-junctions are no bother at all.

The rear side windows aren't too pinched, so anyone sitting in the back won't feel claustrophobic. The rear pillars are quite thick, though, obscuring the driver's over-the-shoulder view.

Thankfully, all XFs come with front and rear parking sensors, a 360deg camera and if you pay a bit extra you'll get a Clear Sight rear-view mirror, too. At the touch of a button, this becomes a digital screen that shows a live camera feed from directly behind the car, so you can still see what's behind even if the rear window is obscured. LED headlights are standard on all versions, although stepping up to R-Dynamic SE trim also gets you high-beam assist. Pixel LED lights, meanwhile, are available as an option – these can stay set to main beam even when you don’t have the road to yourself, by shaping their light output to avoid dazzling other road users. 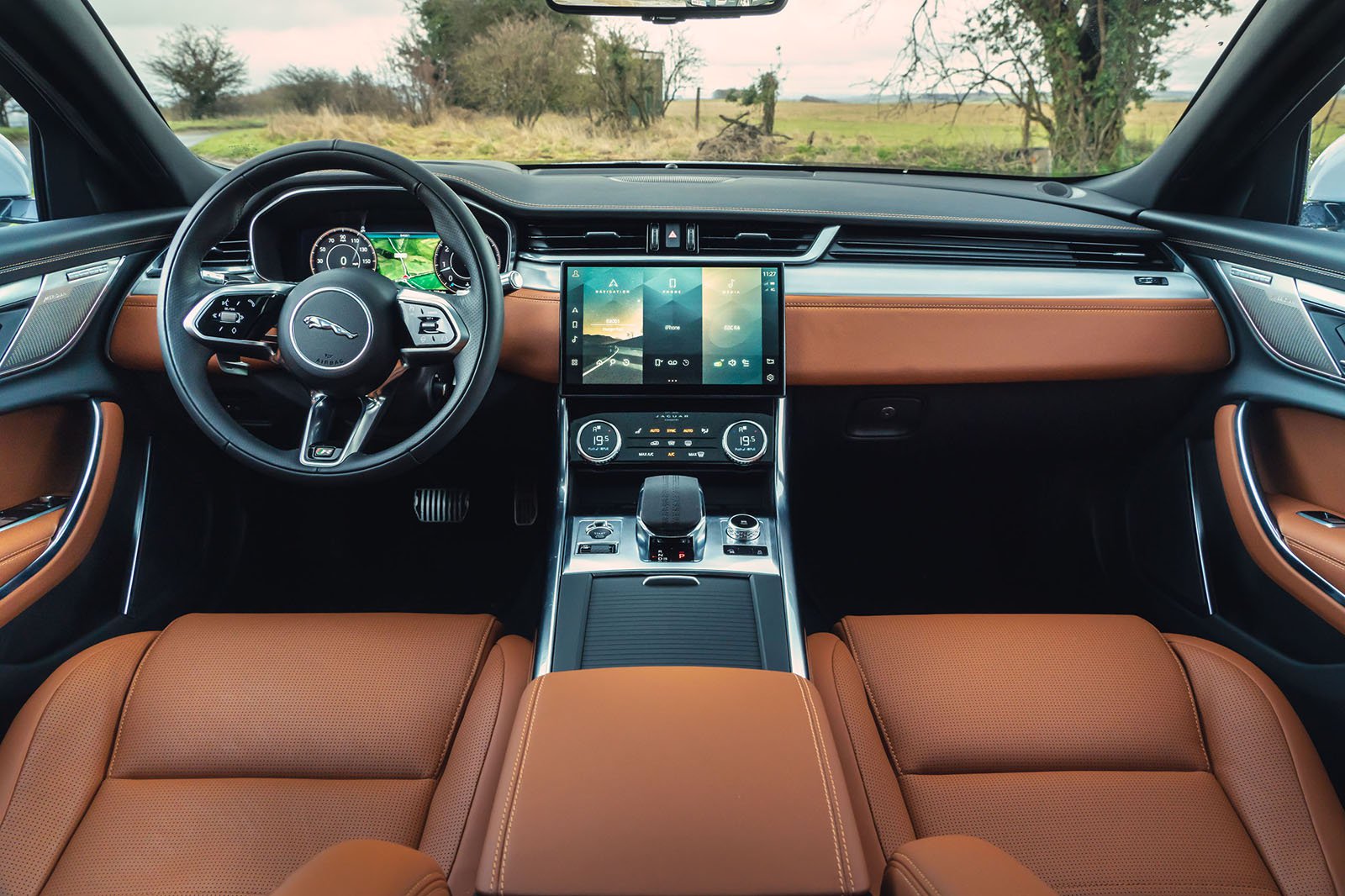 As touchscreen systems go, it's one of the best in the class; it’s relatively easy to use on the move, thanks to having a line of conveniently placed digital shortcut buttons and a handily configurable home screen. The reason we say ‘relatively’, though, is that we’d still prefer the option of a physical rotary controller like you get in the BMW 5-Series. Such an interface would make the system less distracting to use while driving.

The standard 180W sound system is perfectly acceptable, but music lovers can pick from two upgrade options: a 400W Meridian Sound System with 12 speakers (standard on R-Dynamic HSE models) or a more powerful version of the same system with a 600W and 16 speakers. So far we’ve only sampled the former and it is utterly fantastic with weighty bass notes balanced by crisp, precisely drawn highs.

As part of its update in 2021 the XF’s interior was overhauled, with a big focus on improving material quality. And things did improve. The buttons feel nicely damped, denser feeling plastics are present throughout the interior, and the 11.4in touchscreen acts as a nice focal point for the dashboard, with its convex display helping it blend into the dashboard in a neat fashion.

It is a shame, however, that the hide used on the leather seats doesn’t feel particularly plush or expensive, while the fake plastic metal-effect trim in our test car looked cheap compared with what you get in an Audi A6 or BMW 5-Series. It edges the Mercedes E-Class for interior quality, but it’s a close run thing.