The cheapest engine in the lineup is also our favourite. Badged D200, this 201bhp 2.0-litre diesel might not be quite as quick on paper as a BMW 520d, (0-62mph takes just 7.2 seconds in the BMW opposed to 7.6 in the Jaguar) but  it feels impressively punchy from low revs in the real world, and is plenty quick enough to whisk you up to motorway speeds without any fuss. Four wheel drive is available, but, since the rear-wheel drive version is cheaper, more economical and has more feelsome steering (more on that below), we wouldn’t bother unless you live in a particularly weather-beaten part of the country.

The alternatives are the 247bhp and 296bhp 2.0-litre turbocharged petrols (badged P250 and P300 respectively); the former is only available with rear-wheel drive and the latter exclusively with four-wheel drive.

Surprisingly, the range-topping P300, despite having significantly more power than the D200 diesel, doesn’t feel significantly quicker in most day-to-day situations. That’s because you really have to rev it out to tap into the full performance on offer; peak power comes at a heady 5500rpm. And while a revvy petrol engine might sound well suited to a sports-orientated saloon, the standard fit eight-speed gearbox (fitted to all XFs) can be a bit sluggish to respond when you ask for a quick burst of acceleration, and that rather undermines the point of plumping for the most potent engine. We haven’t yet sampled the less powerful P250, but when we experienced it in the smaller Jaguar XE, we found it to be perfectly adequate. It’s also more frugal, cleaner, and quite a lot cheaper than the P300, so if you have your heart set on a petrol XF, we reckon it’s your best bet – just don’t expect mind-bending performance.

The ride is a little bit firm around town, but at higher speeds the XF is comfortable on both standard suspension and the optional adaptive set-up, dubbed Adaptive Dynamics. This is available on all models, but only in conjunction with an option that Jaguar calls 'Configurable Dynamics’ which, you guessed it, gives you access to different drive modes.

Whichever system is fitted, expansion joints and rough roads pass beneath you with minimal fuss and the XF's body doesn't bounce up and down over dips and crests. Of course, adding bigger alloy wheels makes the ride firmer (something you’ll find on most cars) but even on massive 20in alloys the ride never feels uncomfortable.

Rear-wheel drive R-Sport models with either the D200 or P250 engine fitted have a lower, stiffer sports suspension set-up. Unfortunately, the low speed ride comfort suffers as a result. 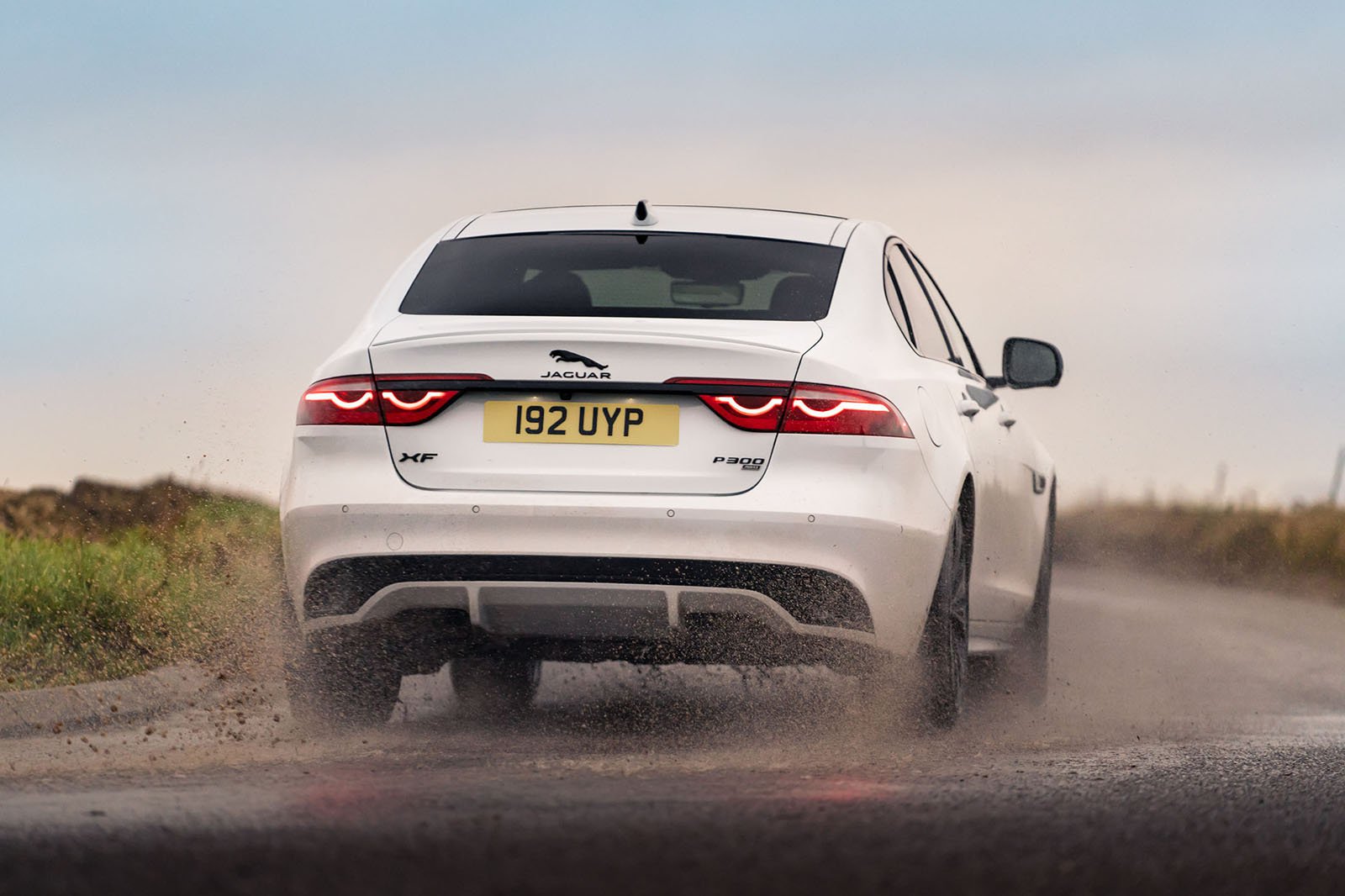 This is where the XF shines. Despite its not insignificant footprint, the XF handles with the agility and athleticism of a much smaller car. A large part of this is down to the steering, which is well weighted, precise and quicker than most key rivals', including the BMW 5-Series.

The tyres generate plenty of grip, giving you lots of confidence when driving the XF quickly along a twisty road. This is helped by the standard-fit torque vectoring system, which helps the car to turn in even more willingly by gently braking the inside wheels in tight corners.

On versions with adaptive suspension, engaging Dynamic mode tightens the handling up even more, but it's best left for super-smooth roads. R-Sport models remain flatter in corners thanks to their lowered, stiffened sports suspension.

The sole diesel engine in the XF line-up, the D200, might not be quite as hushed as the Audi A6 40 TDI’s under hard acceleration, but it’s quiet and subdued around town and at a cruise. The P300 petrol, meanwhile, is even smoother and quieter, but it’s a shame that it doesn’t make a more sporty sound when revved to the redline.

Wind noise isn’t a major issue, with only a slight whistling from the windscreen pillars at higher speeds. However, you might notice a few engine vibrations through the steering wheel, while the standard eight-speed automatic gearbox can frustrate with its tendency to dawdle during shifts.