The Jaguar XJ is one of Britain’s best-loved luxury cars. Through the generations, it has carried Prime Ministers to and from Downing Street, sped company executives from meeting to meeting and, of course, delivered countless brides to their weddings.

The 2003 model, which was in production until 2009 and codenamed 'X350', was the last to feature the XJ’s hallmark olde-worlde styling. But in fact, this was a car which broke with tradition; the first XJ to be clothed in lightweight aluminium bodywork, not to mention the first to be offered with a diesel engine.

This proved popular thanks to its superior fuel economy, even if traditionalists preferred the petrol-powered models. The driver’s choice was the supercharged XJR, but even the entry-level XJ6 provided enough pace to make progress effortless. And of course, the Daimler versions, available until 2007, offered enough leather and polished wood to furnish a five-star hotel, even though every XJ had its fair share.

Switchable air suspension, which came as standard on every model, meant the XJ offered a splendid blend of comfortable ride and involving handling. And while the Mercedes S-Class and BMW 7 Series are both finished to a higher standard and more spacious, there's something about the XJ that still tugs at the heartstrings. http://www.whatcar.com/classifieds/used-cars/Jaguar/XJ)** 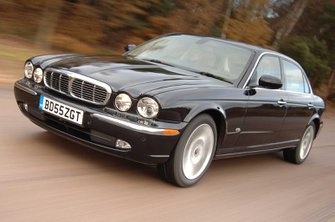