This is one of the best-looking luxury soft-tops you can buy - almost a dead ringer for the Aston Martin DB7, but much cheaper to buy.

The eight-cylinder engine burbles heartily and unleashes powerful acceleration with a prod of the throttle. That said, driving an XK8 is all about covering big distances effortlessly rather than charging about town, although 300bhp is enough to make it quick when need be. If you still want more, however, there's the 400bhp XKR, although these are rare and incredibly expensive to run.

The leather-and-wood cabin is as sumptuous as you'd expect of a luxury Jaguar, but it's cramped, with no legroom to speak of for passengers in the back. The hood lowers quickly and, top down, the cabin remains serene even at speed; but it feels claustrophobic. The boot isn't big, either, although there's space for a weekend's luggage, roof up or down. 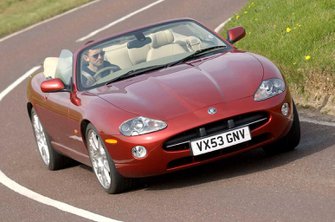