Despite the current trend for electrifying cars, one area of the market where development has been slow is in large estate cars. There aren’t many new ones around and even fewer are available used. Most examples come from expensive, premium brands, but there is one from a more mainstream manufacturer that’s a bit more affordable for those looking out for a used plug-in hybrid: the Kia Optima Sportswagon.

When we say the market for big plug-in hybrid estates is small, we’re not joking. If you really want to shun conventional petrol and diesel-powered cars, you have a choice of the Volvo V60 hybrid, the Volkswagen Passat GTE or the Mercedes C350e. Considering that the V60 and C350e have smaller boots and the Passat GTE is rare and expensive, the Optima Sportswagon starts to make sense. That's especially true if you buy a two-year-old car using Kia’s approved used scheme that tops the warranty back up to seven years – a point where most of its rivals have only one year left.

Under the bonnet is a 154bhp 2.0-litre petrol engine and a 67bhp electric motor. When both power sources work together, performance is fairly brisk, given the size and weight of the Optima. However, the main reason for the plug-in hybrid (PHEV) system is its electric range; on a full charge, you can get up to 33 miles. Charging times range from four to six hours from a standard three-pin plug, or two to three hours from a dedicated wallbox. If you drive mainly on battery power, you should see some high fuel economy numbers. Unfortunately, even when you select Eco mode for electric power only, the engine will kick in promptly when a turn of speed is needed.

In corners, the Optima grips well, but the extra weight of the batteries blunts the handling. The steering is vague and the car isn’t engaging to drive, and the feel of the brake pedal can take some getting used to, due to its regenerative braking system. Ride quality is also a mixed bag, because at low speeds across broken town roads, the Optima Sportswagon fidgets and thuds away, but it works better when you swap suburban streets for the motorway, feeling more settled and comfortable.

But the area in which the Optima Sportswagon really scores is space. There’s loads of it up front and the rear is pretty good, too, with plenty of leg and head room for six-footers and taller; even three sitting side by side will be happy for most journeys. Unlike the saloon version, the additional batteries don’t have much of an impact on boot space, so transporting large items such as a child’s pushchair or a set of golf clubs is no problem.

The interior materials vary from slightly too scratchy black plastic to a pleasing mix of soft-touch ones. The driving position is rather good, with lots of adjustment in the seats and steering wheel, and the dashboard layout is logical, with easy-to-use switches. You get a cracking infotainment system, too, with a screen that’s responsive and has easy-to-navigate menus. 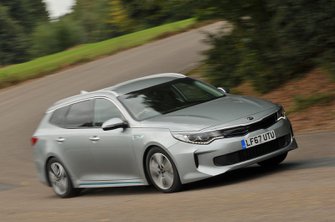