Previous generations of the Kia Rio earned a reputation for being rather dull in the way they looked and drove, but with the third-generation model the company upped its game considerably, and at the same time set mainstream European models firmly in its sights.

This Rio’s styling was a great improvement on what had gone before, with a bold front-end and a sleeker roof line. Its longer wheelbase gives it rear legroom that’s among the best in the class.

The boot is actually slightly bigger than you’ll find in the equivalent Volkswagen Polo, though fractionally smaller than the Ford Fiesta’s, while all models have split-folding rear seats. Interior quality is also step up on the previous Rio, if still not quite up to the standards of rivals’.

However, in terms of driving dynamics, the Rio falls short of the best in class for handling and road holding. The ride is also on the firm side, both around town and on the motorway.

But Kia’s seven-year, 100,000-mile warranty goes some way to make amends for this as a used proposition, as does the Rio’s five star Euro NCAP safety rating.

Four engines are available – two petrols and two diesels – and with low CO2 emissions (as low as 85g/km for the 1.1 CRDi EcoDynamics model), decent fuel economy and several trim levels to choose from there’s a Rio for every budget. Although, it was initially available only as a five-door, a three-door model was added in 2012 to appeal to younger buyers. 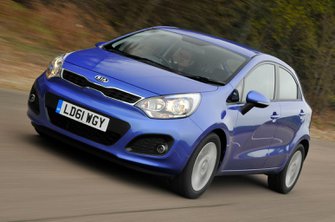