For anyone familiar with the poor previous-generation Mercedes M-Class, this version could not be more different. The latest car is on a par with its major rivals in every respect.

With the optional air suspension, it has a better balance of ride and handling than a BMW X5, which is no mean feat, and even on the standard suspension it's impressive.

Its refinement is also hard to fault, the seven-speed automatic gearbox is wonderfully smooth, and putting the gear selector on the steering column has freed up valuable space.

Mind you, space is hardly tight to start with. The M-Class has more legroom front and rear than rivals such as the BMW X5 and Volvo XC90, and is second only to the Land Rover Discovery for headroom.

Its boot, too, is one of the very biggest in its class, and just about the only complaint is that, unlike some of its rivals, it doesn't have a seven-seat option. 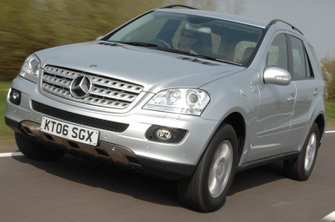