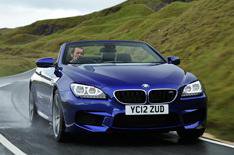 The new BMW M6 Convertible is the most expensive version of the 6 Series Convertible, and a rival to rapid four-seater drop-tops such as the Jaguar XKR-S, Maserati Grancabrio and Porsche 911 Cabriolet. You could also consider it as a rival to the Mercedes SL63 AMG.

The M6 Convertible is powered by the M5 super-saloon's 4.4-litre twin-turbo V8 engine, so there's 552bhp plus 501lb ft of torque, available from just 1500rpm.?? You also get the M5s M-DCT twin-clutch gearbox, which can be programmed to suit different tastes, as can the suspension settings, and steering and throttle responses.

What's the 2012 BMW M6 Convertible like to drive?
A gentle squeeze of the throttle is all that's needed to send the car storming forward, while a more aggressive approach can get it from 0-62mph in just 4.3 seconds.

As a bonus, the exhaust note sounds pretty exciting once the revs are past about 4500rpm, and you can hear it in all its glory if you lower the roof or the vertical rear screen.

The engine is only part of the story, though. BMW's M division has given the M6 bespoke alloy suspension and a trick limited-slip differential, and it has swapped the regular 6 Series Convertibles electro-mechanical steering for a hydraulic set-up in an effort to improve feedback.

Hugely capable, but not as thrilling as a Porsche 911 Cabriolet

These changes help the M6 feel very agile for a car that weighs more than two tonnes, although its not as alert and involving as a 911 Cabriolet and the rather remote steering is overly heavy when its in its sportiest setting.

The twin-clutch gearbox is harder to fault, delivering smooth shifts in full auto mode and ferociously fast ones when you select one of the more aggressive settings.

Whats more, the body of the M6 is largely wobble-free, and it has a pretty forgiving ride for such a focused car.

With the roof up, the M6 Convertible is almost as refined as the 6 Series Coupe, but you have to put up with a bit of buffeting when it's down, even when the wind deflector is fitted across the rear seats.

What's the 2012 BMW M6 Convertible like inside?
Genuine carbonfibre trim and an elegant sports steering wheel make the M6 feel more special than lesser versions of the 6 Series, while BMWs iDrive control system gives you quick and easy access to the cars many infotainment functions.

Interior is a model of useability and comfort

Theres plenty of space in the front, too, and the M6s sports seats are hugely adjustable. However, adults will be cramped in the back especially when the roof is in place and the boot is significantly smaller than the M6 Coupes.

The roof can be lowered at speeds of up to 25mph and takes 19 seconds to fold away (24 seconds to raise).

Should I buy one?
The M6 Convertible is a hugely capable car, but its also hugely expensive.

At 100k it costs almost 8000 more than a 911 Carrera S Cabriolet thats equipped with Porsches PDK twin-clutch gearbox, yet the 911 is more enjoyable to drive and will hold its value better. Its where our money would go.