The Porsche 911 is one of the all-time great sports cars. It has been around since 1963, survived even when company bosses tried to kill it off, and has spawned a vast number of derivatives.

One of the things that’s been key to its success is the way the 911 has evolved to include the latest technology and ever increasing levels of performance while retaining the essence of what made the early cars so great. And so, even though the 997 version featured here was launched more than 40 years after the original, it is still recognisably a 911.

A large part of that comes to having the engine mounted in the rear of the car, which in turn dictates the shape of the bodywork and allows for a 2+2 seating arrangement and a surprisingly large boot in the nose of the car (it’ll swallow a couple of soft weekend bags with ease). True, the rear seats are only really suitable for kids, but even the entry-level 911 can accelerate from 0-62mph in 4.8 seconds, and that means this is one of the most practical cars to offer that sort of performance.

What also makes the 911 stand out is just how easy it is to drive. Visibility is excellent for a sports car, the ride quality is perfectly acceptable (particularly if you have the PASM adaptive dampers), the engines are smooth and the controls are all so precisely weighted that it never feels less than completely intuitive.

However, all this would be for nothing if the 997 had lost the unique driving experience offered by older 911s. Thankfully, that’s not the case in the slightest, for this is a car with steering that is at once delicate, precise, well-weighted and brimming with feedback, while the rear-engined, rear-wheel-drive layout ensures the tyres bite into the road with unbelievable grip. Advanced traction and stability control systems, meanwhile, ensure even novices can drive a 997 quickly.

As with any generation of 911, the 997’s model line-up is fairly complex. To keep things as simple as possible we are only concentrating here on the rear-wheel drive Carrara with 321bhp and more powerful Carrera S with 350bhp, and the four-wheel-drive Carrera 4 and Carrera 4S. Other models, such as the Turbo, GT3, Targa and Convertible are different enough to warrant reviews all of their own.

To complicate matters slightly, the 997 range is also split into pre- and post-facelift, also known as Gen 1 and Gen 2, the first from 2005 to 2009, and the second from 2009 to 2012. As well as the introduction of direct injection for the engines (taking the Carrera to 340bhp and the Carrera S to 380bhp), one of the major differences was the switch of the Tiptronic torque converter automatic gearbox to a much more responsive seven-speed dual-clutch PDK unit. 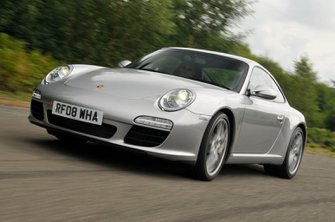