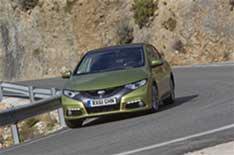 What is it? Its the car or rather, the engine that promises to bring Hondas latest generation of Civic into line with most of its rivals. The hatchback was relaunched recently with a relatively large 2.2-litre diesel engine, but this new 1.6-litre motor will go on sale in autumn 2012.

The new engine has little in common with its larger stablemate, however. It has an aluminium block, and weighs around 170kg 50kg less than the 2.2. It produces 118bhp at 4000rpm, and peak torque of 221lb ft arrives at 2000rpm.

Honda has yet to release economy figures, although it has stated that the new motor which comes with engine stop-start as standard will emit less than 100g/km of CO2.

Whats it like to drive? Our brief test run on Hondas Twin Ring Motegi race circuit wasnt an ideal proving ground, but the 1.6 felt strong at low revs. Like most small diesels, it has a relatively narrow power band - its all done and dusted by 4000rpm but its gutsy enough to make the Civic feel rapid if youre prepared to keep changing gears. Hondas slick six-speed manual transmission helps here, too.

Refinement under hard acceleration isnt really any better than the class average, though, and while the motor does settle at motorway cruising speeds, its still a rumble beyond what youd hear from a Golfs powerplant. The Civics stop-start system doesnt feel quite as fast, either, but its still decent.

Whats it like inside? Much like any other of the new Civics which means that material finish is good, the boot is a good size and there are nice practical touches such as rear seats with folding bases.

On the other hand, headroom will be an issue for taller drivers and the driver-focused, wraparound dashboard a clear carry-over from the previous generation of car is as much a Marmite feature as ever. Youll either love or hate its plethora of buttons, although at least some of the wilder computer game-influenced colours have been toned down this time.

Should I buy one? You wont be able to until the third quarter of next year. The 1.6 is a solid effort and this engine option should be the pick of the Civic range when it turns up. However, wed be surprised if the new engine alone is enough to lift the car above the strong class leaders.