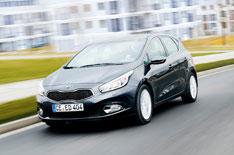 The all-new Kia Cee'd shares much with the 2012 Hyundai i30, but has a clean crisp style all of its own.

The design and engineering has been done in Germany and as before the Cee'd is built in Slovakia. Kia's credibility as a maker of cars that can compete with those from Europe and Japan comes largely from the previous Kia Cee'd, and the new one aims to continue the process.

The nose bears a new version of the pinched Kia grille, separated from the headlights. The waistline rises steeply as it heads rearwards, and the whole car is 50mm longer and, in a welcome development, 10mm narrower despite having extra interior space. Weight has dropped slightly, too. There's an attempt to give the cabin a premium feel, and the engines two petrol and two diesel, each type of 1.4 or 1.6 litres are all calibrated to generate minimal CO2.

Power options are 99 or 133bhp petrol, 89bhp for the 1.4 turbodiesel and either 108 or 126bhp for the 1.6 diesel. All come with six-speed gearboxes, be they manual, conventional auto or double-clutch semi-auto.

Whats the 2012 Kia Cee'd like to drive?
We tried two versions of the new Cee'd - the 126bhp turbodiesel (likely to be the biggest seller), and the 133bhp petrol with the new, Kia/Hyundai-made, double-clutch gearbox, which is optional only with this engine.

Both are impressively smooth and quiet most of the time, but the petrol engine can sound tinny and raucous when worked hard which you have to do a lot if you're in a hurry. It certainly doesn't feel like it has 133bhp, but the gearbox's responsive, smooth-shifting, paddleshift manual mode helps you make the most of the engine's efforts. There's also a Sport setting for the auto gearbox, but it hangs on to the lower gears for too long.

The diesel is a more relaxing drive, but in this pre-production test car it didn't feel as lively as it does in the equivalent Hyundai i30. Another disappointment is the ride, which feels too stiff over sharp bumps. However, the stiffer body structure helps ensure that the impacts don't crash through too noisily. The upside to this is that the Cee'd handles very tidily and precisely, with excellent control of big body movements and accurate, consistent electric power steering with credible weighting and none of the stodge that often afflicts such systems.

Whats the 2012 Kia Cee'd like inside?
Quite upmarket, with a fully padded dashboard, some interesting shapes framing the instrument panel and centre console, chrome around the dials and an aluminium-look, piano-black or chrome finish to some of the detailing depending on the trim level.

Higher-spec Cee'ds get a TFT central dial, like the one in a Jaguar XJ, which looks like a conventional instrument around its edge but is actually a screen image. A graphical information screen occupies the centre console.

Lower-spec models have a normal handbrake, uprange ones suffer an electric version. Top Cee'ds have electric adjustment for the driver's seat, but all have a comfortable and thoroughly adjustable driving position. A large-screen sat-nav is optional; the next level down has a touch-screen stereo. Quarter windows in the front pillars avoid the blind spot that troubles the Cee'd's i30 cousin.

There's plenty of space in here, more than in the previous Cee'd and among the best in the class. The boot has grown, too, with a 380-litre capacity (more than in a Ford Focus or VW Golf
), and the rear seats fold fully flat with the cushions tipped forward out of the way.

Should I buy one?
You certainly have a big choice of Cee'd versions, with trim levels stretching from base 1 (still with air-conditioning) right up to fully loaded 4. There are EcoDynamics high-economy versions of the 1.6s, too, which brings the 126bhp diesel's CO2 output down from an already impressive 109g/km to 97, while the petrol car drops from 135g/km to 109. These figures, competitive pricing and Kia's seven-year warranty are a potent draw, and the Cee'd is a handsome, well-equipped car with excellent handling. However, its Hyundai relation - smoother-riding and subjectively livelier - is more pleasing to drive.