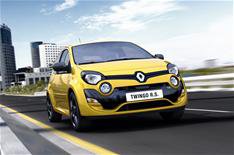 Prices for the Renault Twingo Renaultsport 133 will start at 13,565, when it goes on sale on April 2.

The face-lifted version of Renaults smallest hot hatch costs 605 more than the model it replaces. Like the rest of the 2012 Twingo range, the Renaultsport model has updated styling, with new-look front and rear ends. Renaultsport touches include gloss black rear spoiler, door mirrors and F1-influenced front blade, although these can be upgraded to Anthracite Style grey as a 150 option.

The 2012 Twingo Renaultsport uses the same 131bhp 1.6-litre petrol engine as the previous model. Performance figures remain the same; the official 0-62mph figure is 8.7 seconds, while top speed is 125mph.

A Cup chassis is a 700 option - this includes a lower ride height, stiffer suspension and gloss black or Anthracite 17-inch alloy wheels as standard.

A cheaper Cup model - with the Cup chassis, but less standard kit than the current car - is likely to be added to the range later in 2012.