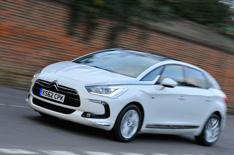 The Citroen DS5 Hybrid has been on sale for almost a year, and during that time we've praised it for its avant-garde looks, low CO2 emissions and excellent refinement. However, a punishing ride has made the big Citroen hard to recommend.

Now, for the first time, we've had the chance to drive an entry-level model on its smaller 17-inch alloys (other models get 19-inch wheels). The question is, does the smaller wheel size sufficiently improve comfort to make the Citroen a worthy alternative to the BMW 3 Series or Mercedes C-Class?

What's the 2013 Citroen DS5 Hybrid4 like to drive?
With a 161bhp diesel engine under the bonnet and a 36bhp electric motor mounted on the rear axle, the hybrid DS5 is capable of fairly rapid performance.

Whenever it's called upon, the diesel engine is strong, smooth and refined, while the linear surge from the electric motor means there's little loss of momentum between gearchanges.

There are four different driving modes 'Auto', 'ZEV', 'Four-wheel-drive' and 'Sport' which are selectable via a dashboard-mounted rotary selector.

Select 'ZEV' and, as long as the batteries have sufficient charge, the electric motor alone delivers near-silent running and zero tailpipe emissions.

'Four-wheel-drive' mode instructs both power sources to work in tandem to boost traction, while 'Sport' quickens throttle responses and gearshifts to maximise performance.

However, we found it best to leave it set to 'Auto', which lets the car's electronic brain decide how the diesel engine and electric motor can best optimise fuel economy and performance.

Although nowhere near as slick as a full automatic, the robotised manual gearbox roundly criticised in other Citroen models because of its ponderous shifts operates fairly smoothly.

We already know that on big wheels and low-profile tyres the DS5's ride is excruciatingly brittle, but things are not nearly as bad on the relatively modest 17-inch wheels and chunky tyres that we tried. However, the Hybrid's suspension still has a tendency to become crashy at low speeds.

Things improve immeasurably at higher speeds, to the point where the DS5 feels impressively secure and settled on the motorway.

What's the 2013 Citroen DS5 Hybrid4 like inside?
The hatchback layout and square boot make the DS5 more practical than its saloon rivals, and the cabin looks fantastic.?

The range-topping DSport model is slightly compromised by its three-part glass roof (which limits headroom) and by the massaging front seats (which reduce rear legroom), but cheaper versions are better in both respects.

The stereo controls are also difficult to operate and parts of the instrument binnacle are hard to read. However, the elevated driving position gives a good view of the road ahead, and the pedals aren't offset to the right like they are in most of the DS5's German rivals.

Should I buy one?
The vast majority of DS5s will end up in the hands of company car drivers, and this is where the Hybrid4 comes into its own.

Keep the wheel size modest and not only will you be rewarded with acceptable levels of comfort, but you'll also benefit from ultra-low CO2 emissions and accordingly cheap company car tax bills.

On top of this, you'll be buying one of the most unique-looking cars currently on sale in Britain. Both inside and out, the Hybrid4 is guaranteed to turn heads wherever it goes.

Deal of the day: Citroen DS5

Citroen DS5 to get revised suspension