The executive saloon market has long been a close battle between Audi, Mercedes-Benz and BMW. So it’s no surprise that Audi pulled out all the stops to ensure the seventh-generation A4 was a worthy contender. It’s roomy, well built and offers a class-leading interior not only in terms of outright space but in quality too.

The A4 is an evolutionary design and has been criticised for looking too similar to its predecessors, but it’s still a well-proportioned machine that looks particularly striking in Sport or S line trim. Not only that, it has slightly more space for passengers than a BMW 3 Series (the boots are identical in size), meaning it matches its other German rival, the Mercedes-Benz C-Class. That means that compared with a Jaguar XE, the A4 is positively cavernous.

The car was treated to a facelift in 2019. At the front, the updated A4's trademark 'singleframe' grille keeps it in line with other Audi models. You might also spot that LED headlights have become standard across the range and display a unique light signature.

Around the back, the latest A4's taillights closely resemble those of the more expensive Audi A6. The A4 doesn’t have the full-width brake lights of the A6, but every model gets a smattering of chrome exterior details that add to its upmarket looks. That theme continues inside, too, where the A4's all-touchscreen infotainment system hints at more expensive Audis, such as the flagship A8 limo.

There’s always been an extensive line-up of engines to choose from, too, with 1.4-litre and 2.0-litre petrols along with punchy 2.0 TDI and 3.0 TDI diesels. All the engines, bar the 1.4, are available in two states of tune, depending on whether performance or economy is most important.

Speaking of economy, those on a budget will love the 2.0 TDI Ultra, not only for the way it sips fuel but also the fact that examples registered before the tax changes of April 2017 came into force are exempt from road tax as they emit less than 100g/km of CO2.

Upgrade to Sport and you'll find more supportive front sports seats, interior ambient LED lighting, sat nav and a 10-speaker audio system, while S line models get a bodykit, sports suspension, 18in alloy wheels, LED head and rear lights and a leather and Alcantara upholstery. Topping the range is the Black Edition trim, which adorns the A4 with 19in alloy wheels, tinted rear windows and lots of gloss black interior and exterior trim.

If you go for an S4 you'll get all the standard equipment found on an S line A4, plus an Audi Sport-designed bodykit, suspension, braking system and alloy wheels, front super sports seats with massaging function, Nappa leather upholstery and an upgraded Audi MMI infotainment system with a touch control panel and an 8.3in display.

While the A4 is in its element on the motorway, it’s not as exciting to drive as the BMW 3 Series, with the steering lacking anything in the way of feel and the suspension not giving the same sense of agility. Ride quality is also rather poor in the larger-wheeled S line and Ultra models, which also have lowered and stiffened suspension, although the optional adaptive dampers resolve this, if you can find a car so equipped. If you can’t, stick with an SE on smaller wheels and the A4 is a very agreeable companion. Later post-facelift models became Technik, Sport and S line, with a range-topping Black Edition.

Overall the A4 has much to offer: good engines, a great interior and decent resale values – making it an excellent used buy. 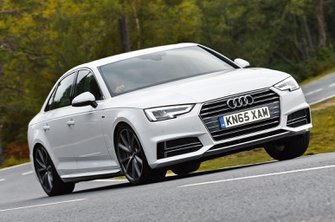