So impressed were we with current Audi A4 that we voted it our overall Car of the Year when it was launched in 2016. That was almost four years ago, though, and Audi knows how important it is to never rest on its laurels.

To stay in touch with the Mercedes C-Class and the BMW 3-Series in arguably the longest-standing three-car rivalry since we moved away from horseback, the A4 received a heavy visual update in 2019. But was it enough to keep the competition at bay?

At the front, the latest A4's trademark 'singleframe' grille keeps it in line with other Audi models. You might also spot that LED headlamps are standard across the range and display a unique light signature.

Around the back, the latest A4's taillights closely resemble those of the more expensive Audi A6. The A4 doesn’t have the full-width brake lights of the A6, but every model gets a smattering of chrome exterior details that add to its upmarket looks. That theme continues inside, too, where the A4's all-touchscreen infotainment system hints at more expensive Audis, such as the flagship A8 limo.

Audi has kept the A4's engine petrol and diesel engine lineup fresh, too, but is this all enough to best the car's rivals in the executive car class? Read on over the next few pages for everything you need to know about the A4, including which trim level, engine and options you should pick. Don’t forget there’s also the V6-powered Audi S4 which might be worth a glance if an ordinary executive saloon sounds a bit slow.

And remember, if you want to buy an A4, then don't forget to check out our New Car Buying pages. You could save a small fortune without any awkward haggling. 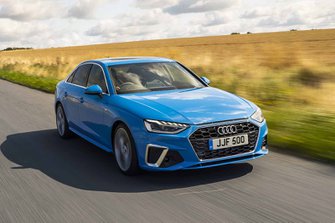 The Mercedes C Class looks swish and the diesels are super-eff...