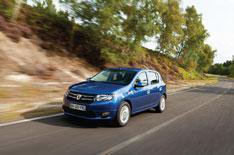 The Dacia Sandero is not only bigger than your average supermini, it also costs thousands of pounds less to buy.

At just over four metres long, it's substantially larger than a Ford Fiesta or Volkswagen Polo. Yet despite the size advantage, the Sandero costs from just 5995 in 1.2-litre Access form.

Even the range-topping diesel Laureate costs just 9795 a price that represents the starting point for most of the Dacia's supermini rivals.

What's the 2013 Dacia Sandero like to drive?
The Sandero is pretty good to drive, although there are some signs of the inevitable cost-cutting measures.

The ride and handling is inconsistent. At low speeds the Sandero is unsettled, but loose body control means it can feel quite floaty at faster speeds. Overall, though, the Dacia is never uncomfortable.

The steering is perfectly acceptable at town speeds and initially feels sharp as you turn the wheel. Although it would benefit from more weight on faster roads, it's better than the vague steering that some budget superminis suffer from.

The new three-cylinder engine is a decent unit; it revs willingly and avoids the sudden boost of power that sometimes characterises small turbocharged engines. It's hampered a little by the five-speed gearbox, though, which has an imprecise, long-throw shift.

For all the strong performance delivered by the engine, the CO2 output of 120g/km is disappointingly high compared with many three-cylinder petrol engines in the class.

What's the 2013 Dacia Sandero like inside?
The Sandero is certainly more spacious than the majority of superminis, and its large swathes of glass and generous headroom make the front a pleasant place to be.

Those in the back will be comfortable enough, too. The rear seats will accommodate two adults, although six-footers might find legroom a bit tight.

The boot has a usefully low lip and offers 320 litres of luggage space around 40 litres more than in most superminis. The rear seats fold down, but they don't lay completely flat.

There are some cheap plastics around the cabin, but contrasting textures and colours add interest to the unexceptional but functional dashboard.

However, one big downside is the lack of reach adjustment for the steering wheel. Even the height adjustment is a touch limited, so some people will struggle to find the perfect driving position.

There's not as much scrimping on equipment as you might expect, though. Standard features on Laureate models include air-con, Bluetooth, a USB socket, cruise control and steering-column-mounted stereo controls. All Sandero models get stability and traction controls, and four airbags.

Our test car came with a 250 optional seven-inch colour touch-screen, which gives the interior's appearance a real lift. It's a worthwhile addition, given that it also adds sat-nav.

Should I buy one?
The Dacia Sandero isn't faultless; there's evidence of cost-cutting measures throughout, but that's hardly surprising when you consider that the mid-spec 0.9 TCe model costs 3100 less than the cheapest five-door Ford Fiesta.

What's even more astonishing is that the Sandero isn't worth recommending on price alone. It's decent to drive, easy to see out of and doesn't feel as low-rent inside as you might expect.

The Sandero is an endearing and well-rounded package that requires fewer compromises than expected given the incredibly low price.

Read more about Dacia on whatcar.com >>