The Dacia Sandero may be from a Romanian brand that’s owned by the French (Renault, in case you didn’t know), but its name has its roots in Greek. It means warrior or defender. And what a defender of good value this little car is.

In fact, is there another new small car that offers such amazing value? None that we can think of. Even the MG 3 is several thousand pounds more expensive than the entry-level Sandero, while that other venerable value brand, Skoda, doesn’t field a Fabia that gets anywhere near this level of price-cutting.

Okay, so it’s cheap. But are you getting what you pay for – that is, a boggo box on wheels? Well, if you’ve had any experience of the previous Dacia Sandero, you might well be thinking “Oh yes”. The most modern thing about that was that it felt like it could travel through time. Sadly, straight from the 1990s.

But forget all that for this latest-generation Sandero. It’s based on current Renault Clio underpinnings, so it’s thoroughly modern underneath, and arguably its styling is just as bang up to date. The entry-level version is certainly stripped bare for those who aren't fussed about luxuries, but there are models that balance a great price with some modern creature comforts.

Still, we’re talking about a class of car that includes the Ford Fiesta, Peugeot 208 and Volkswagen Polo. Can the Dacia Sandero really compete with such stalwarts of the small car fraternity on anything other than price? Read on to find out.

And when you’ve discovered all the answers, do check out our New Car Buying service because, with our fantastic, no-hassle deals, we could save you plenty of cash without you needing to haggle.

So far we’ve only driven one engine: the turbocharged 1.0 TCe 90 petrol. It has 89bhp and a six-speed manual gearbox (with the option of a CVT automatic), and in our tests it managed 0-60mph in a respectable 11.0sec. Yes, that’s slightly slower than rivals such as the Ford Fiesta 1.0 Ecoboost 95 and Volkswagen Polo 1.0 TSI 95, but it doesn't feel slow at all. There’s plenty of low and mid-rev shove for keeping up with traffic – even on the motorway.

There's also a Bi-Fuel version of the TCe engine, which has a bit more power (99bhp) and can run on liquefied petroleum gas (LPG) as well as regular unleaded. It switches automatically between the two fuel sources and, with both tanks brimmed, offers a range of more than 800 miles. LPG is super-cheap, too (more on that in the costs section).

The third and final engine is the SCe 65. This engine is also a 1.0-litre petrol, but it isn't turbocharged. Even without driving it, we're pretty confident it’ll be very slow (0-62mph officially takes a pedestrian 16.7sec) and worth avoiding.

The Sandero has relatively soft suspension, which smoothes out creases and folds in the road without bouncing you around in your seat nauseatingly like a Citroën C3 does.

Indeed, if you want a small car with an appreciably comfier ride, you’ll need to spend a load more cash, because it’s only cars like the Peugeot 208 and Volkswagen Polo that offer more polish on really calloused roads. 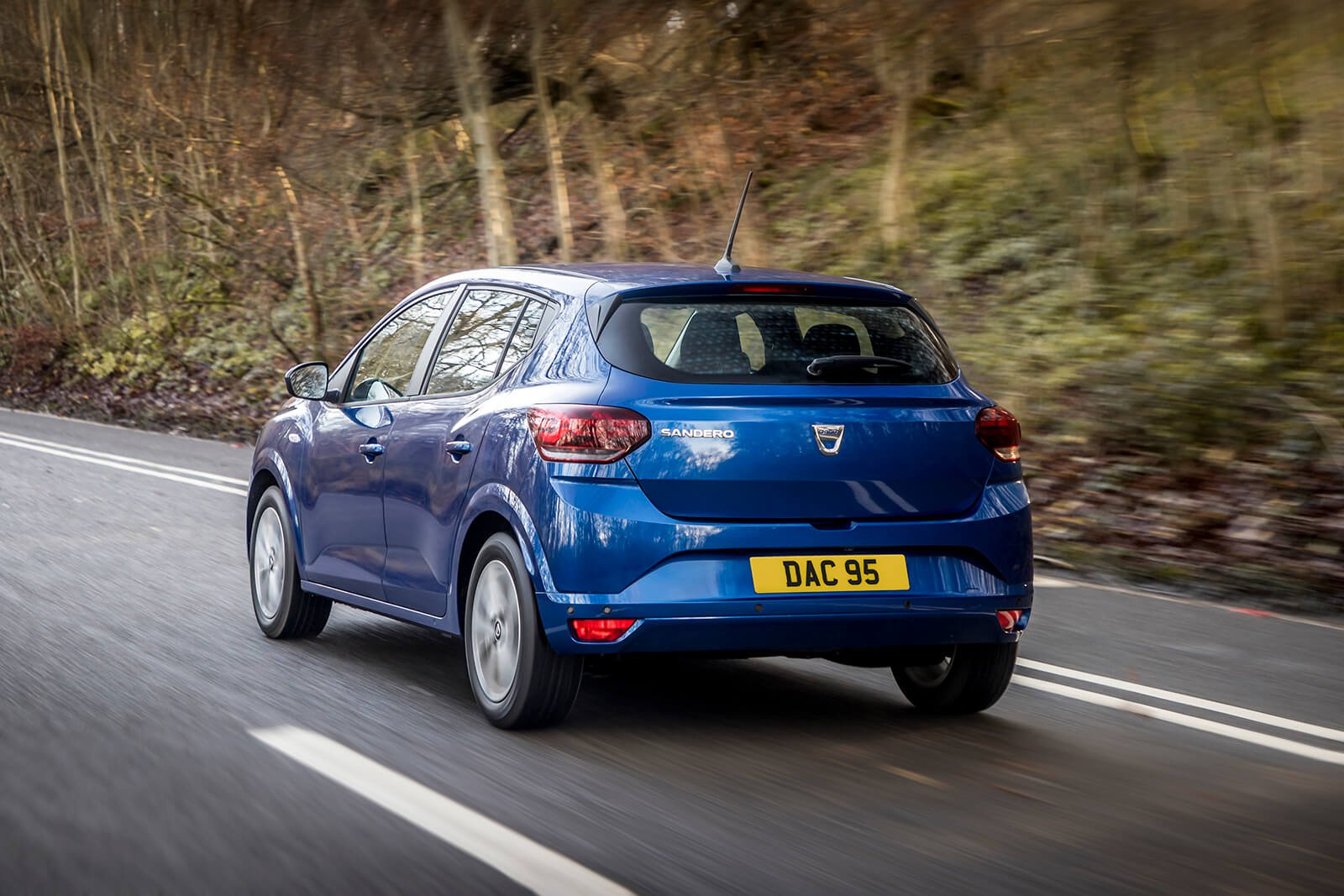 It’s fair to say that the Sandero isn’t the most exciting car to pedal down a twisting B-road; if you want thrills a minute, buy a Ford Fiesta (used if you can't stretch to a new one), which is a cracking little car to drive.

The Sandero is absolutely fit for purpose, mind. Sure, there’s some body lean through tight twists and turns, but there's a decent amount of grip and the steering weights up enough through bends to give you confidence at higher speeds.

In terms of being able to drive the car smoothly, which is one aspect of refinement, there are no vices. The clutch has a clear biting point, the brakes aren’t too sharp and the engine picks up cleanly and smoothly when you squeeze your right foot.

However, that engine (remember, we’ve only driven the TCe 90) is more raucous than the 208’s, and those of many other rivals, for that matter, with whooshes from the turbocharger and a distinct thrum when you work it hard.

That dies away as you hit a steady cruise, though. And yes, you'd hear less wind and road noise at motorway speeds in a 208 or Polo, but compared with small cars at the lower end of the price spectrum, such as the MG 3 and Suzuki Ignis, the Sandero is a reasonably hushed mile-muncher.

A brilliant small car that only the regular Sandero can t...

Funky looks inside and out, but poor to drive and not very pra...