The Kia Picanto has become something of a rarity. That's because it's a dinky city car that runs on petrol, whereas most of its former rivals have either gone electric or been removed from sale altogether.

Why? Well, there simply isn't much profit for manufacturers in building cheap petrol and diesel cars. They'd rather you dropped thousands more on a small SUV, an electric car or a new-fangled plug-in hybrid. But if you don't want to spend much cash and don't need a huge amount of space, a city car is still an extremely compelling proposition.

Kia's cheapest model comes with five doors as standard, and you can choose between three petrol engines and a manual or automatic gearbox. There’s even an SUV-aping X-Line version, although it’s more about looks than real rough-and-tumble driving.

Although the Picanto doesn't have much direct competition, the little it does have is pretty good, and includes the Hyundai i10 and Volkswagen Up. How does the Picanto stack up against those rivals? Read on and we'll tell you all you need to know.

And, don't forget, if you want to buy a Kia Picanto, one of its rivals or indeed any other new car, head over to our New Car Buying pages to find out how much you could save without any awkward haggling. 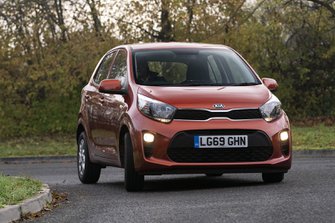