As with the game of blackjack, when it comes to naming your small, French hatchback, do you stick or twist? That's been the conundrum faced by the Peugeot 208, which began life as the 205 back in 1983 and has been renamed on three occasions since. This time, though, it's kept the same digits as the last version.

Great, but let's be clear: this is a very different car from the last 208. That's marvellous news; the last 208 wasn't great, you see, and in a class full of long-established names, such as the Ford Fiesta, Volkswagen Polo and Seat Ibiza, that's very bad if you want to keep attracting buyers.

So, on the outside, the current 208 really cranks up the French chic 'thing', but that's nothing compared with what's going on inside. Seriously, take a peek through the window and you're greeted with an exciting, refreshing take on what a small car's interior should look like. We'll tell you if it's all style over function later on in this review, but it certainly outshines the arguably drab competition in the showroom showdown.

It's a pretty simple model line up, with four trims and the option of three petrol engines. There's only a solitary diesel engine, and the real headline-grabber for the 208 is that there’s an electric model, the e-208. You can read about that model by clicking the link.

The all-important question, though, is whether the 208 can offer virtues beyond just style and hit the sweet spots that it needs to. And can it compete with its premium-badged rivals, like the Audi A1 and Mini 5dr? To find out, read on.

And, whichever car you choose, head over to our New Car Buying pages to see how much we could save you without any tedious haggling. 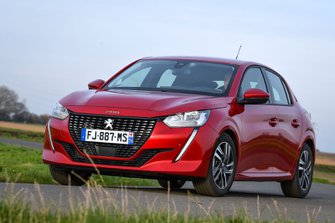 The Mini 5dr is your best bet if you’re after a small car with...