If you want a small car with a properly posh badge, your options are actually quite limited. In fact, you could argue the Audi A1 is in a class of one.

In reality, the Mini hatchback (built by German rival BMW) is seen by many as similarly premium and is roughly the same size. But otherwise you have to go bigger and more expensive (think Mercedes A Class) or accept a less glamorous badge (i.e. a Volkswagen Polo).

The Audi A1 is available with a broad choice of engines, all of them petrols, with power outputs ranging from a sensible to very spicy indeed. As well as Technik, Sport and S line trim levels, there’s also Citycarver model that gets SUV-aping exterior body cladding and a raised ride height. Sadly, Audi's traction-enhancing quattro four-wheel drive isn’t offered on any version of the A1.

So, is the Audi A1 actually any good compared with the Mini? And is it really upmarket enough to justify its price premium over big-selling mainstream rivals, including the Polo but also Peugeot 208 and Ford Fiesta? And which versions make the most sense? Read on to find out.

And, afterwards, head over to our New Car Buying pages to check out the latest Audi A1 deals. You could save a packet without any awkward haggling.

Audi's badging policy bears no relationship to engine size and, to prove the point, the range kicks off with a 25 TFSI, which is actually a 94bhp 1.0-litre petrol. We haven't tried this yet, but we have tried the 30 TFSI version with 114bhp and its performance is more than adequate. It pulls well from around 2000rpm and, if you let the revs build to 6000rpm before changing gear, 0-60mph takes a respectable 9.1sec.

If you need more poke, though – enough to match the Mini Cooper – you might want to look at the 35 TFSI instead. This 148bhp 1.5-litre gets into its stride even earlier, at around 1500rpm, so not only is it faster outright but it's also more flexible than the 30 TFSI. A 197bhp 2.0-litre (40 TFSI) is also available; we'll let you know what that's like once we've had a go.

If you go for the A1 Citycarver, you only get a choice between the 30 TFSI and the 35 TFSI engines. It’s very slightly slower from 0-62mph than a regular A1, with either engine, but not enough to notice.

A smooth, controlled ride is something of a novelty in the small car class. Fortunately, the A1 offers just that — as long as you pick the right trim level. Around town, the SE and Sport trims, which come fitted with 16in wheels and standard suspension, deal with pockmarked urban roads very well; even the nastiest bumps don't ruffle its feathers. It’s a wholly calmer experience than you'll endure in the Mini, which rarely stops jostling.

It’s the same story on the motorway. Where the Mini struggles to settle, the A1 only fidgets on particularly corrugated sections and, in the main, proves itself one of the comfiest cars in its class. The A1 Citycarver has effectively been jacked up by 50mm and also rides smoothly; it actually deals with obstacles such as speed bumps better than the regular A1.

S line trim is a different ball game. This comes with bigger, 17in alloy wheels and sports suspension, which inevitably firms things up. The ride is more brittle over potholes and the like in town, but calms down at motorway speeds. 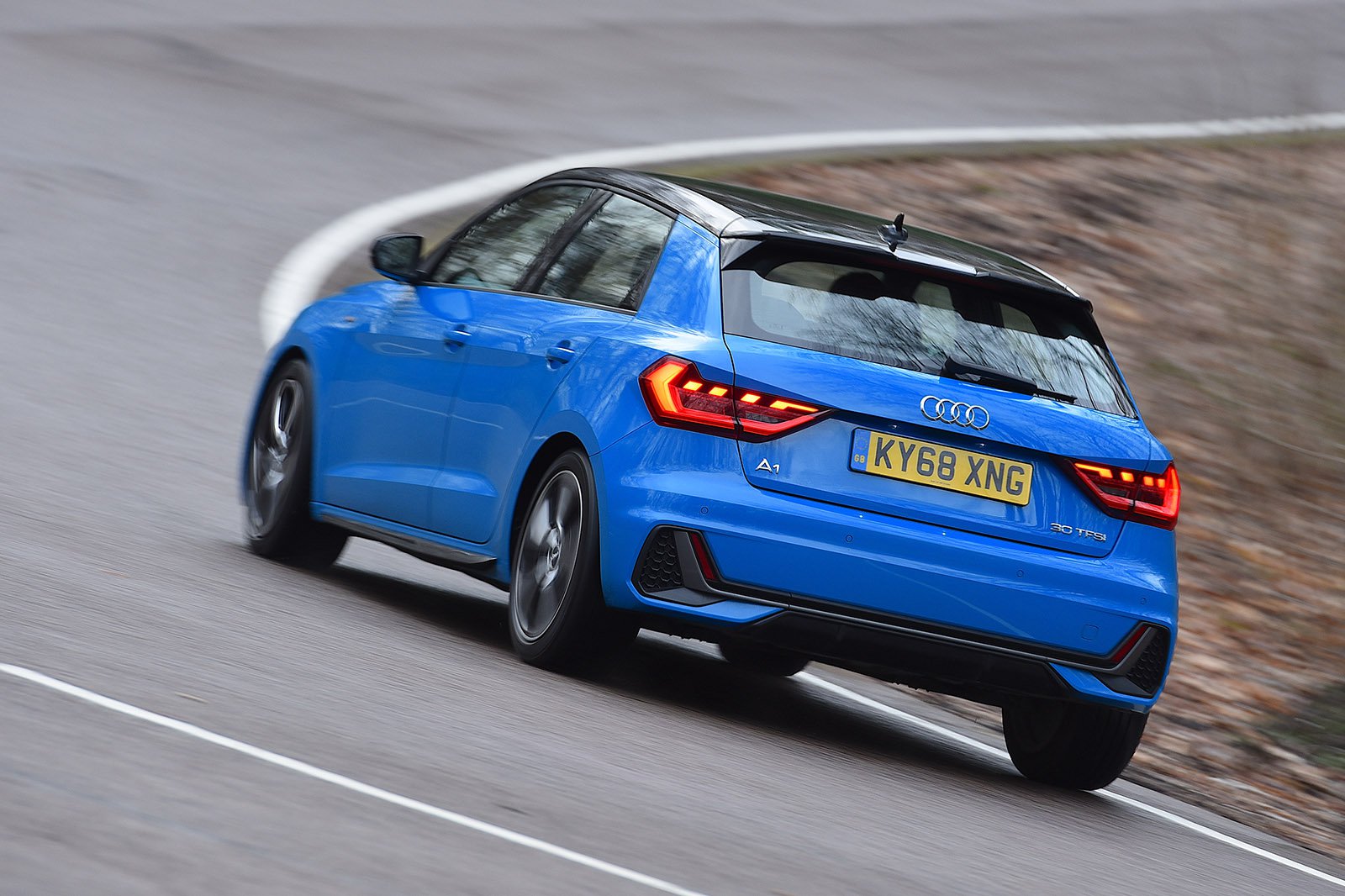 The A1 is surprisingly grown-up to drive, in a similar vein to the closely related Polo. Its steering is well judged: light around town, but with enough weight thrown in at faster speeds to give you confidence. Those virtues are backed up by enough accuracy to let you place the car's nose exactly where you want on a meandering B-road.

If the bends tighten and you maintain a spirited pace, you’ll find a slight tendency for the car to lean in corners, but it's comparatively minor and there's plenty of grip on offer. The Citycarver leans more in corners than other A1 models, but not to the point that this detracts from the driving experience.

S line trim, with stiffer sports suspension, helps keep the A1's body more upright through bends, but does that make it the best-handling car in the class? No. For something truly entertaining, we’d recommend you get yourself behind the wheel of a Ford Fiesta. However, compared with the Peugeot 208 or Mini, which is often perceived to be a sporty little number, any A1 is noticeably better balanced and more composed.

The A1 does a fine job of delivering peace and harmony on the move. Let’s start with its three-cylinder petrol engines (badged 25 and 30 TFSI); these aren't quite as muted as the Mini's 1.5-litre or the Ford Fiesta’s 1.0 Ecoboost, but are hardly boisterous and settle down at a steady cruise. You can feel a little vibration through the controls, but not an excessive amount. The four-cylinder engines (35 and 40 TFSI) are even smoother.

And while you can hear a small amount of road and wind noise, there's not enough of either to irk on a long drive — as long as you avoid the largest 18in wheels. These not only increase road roar, but give rise to more suspension noise, too. Broadly speaking, the A1 is pretty similar to the Polo and proves a quieter cruiser than many other rivals, such as the Mini. The Peugeot 208 is quieter still, though.

The standard manual gearbox has a light and reasonably precise shift, certainly compared with the Mini's. Thankfully, the optional automatic ‘box doesn’t suffer from the initial hesitation that some other Audi autos do, so you won’t have your heart in your mouth when exiting busy junctions.