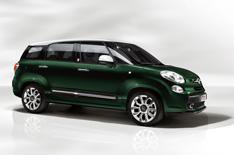 This is the Fiat 500L MPW, a stretched version of the 500L that gets a third row of seats, and a significantly larger boot space when they're folded flat.

Fiat says the 500L MPW, which stands for Multi Purpose Wagon, is the most compact '5+2' MPV in its segment the new car is around 200mm longer than the standard 500L, but is no taller or wider.

The extra length means that boot space has increased to 638 litres, which is 238 litres more than the standard 500L manages with the second row of seats slid fully forward. This should result in boot space of more than 1500 litres with all seats folded down.

The Fiat 500L MPW will be offered with four engines at launch two petrols comprising 94bhp 1.4-litre and 104bhp turbocharged Twinair units, as well as two diesels with either 84bhp or 104bhp. The less powerful diesel comes with an automatic gearbox.

Two trims will be on offer Pop Star and Lounge. If specification matches the smaller 500L, standard equipment will include air-conditioning, six airbags, a clever multi-position boot floor and a five-inch touch-screen radio with Bluetooth. Buyers will be able to choose either five- or seven-seat configuration regardless of which trim they go for.

Pop Star should add a body-coloured dashboard option, chrome inserts for the side rubbing strips and 16-inch alloy wheels. Top-spec Lounge trim should include dual-zone climate control and a full-length glass roof. An integrated navigation system and rear-view camera will also be available.

The 500L MPW will continue the 500 family's focus on personalisation, and Fiat will offer 19 body colours, six interior trims and 15 wheel finishes.

The new model will make its global debut in July. We expect full prices and specifications to be announced at the same time.

Read the Fiat 500L review for parents at Mumsnet Cars >>