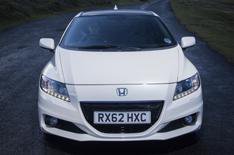 The Honda CR-Z has never been a huge seller, but the company is hoping to give its sporty hybrid some added appeal with this mid-life face-lift.

Power for the 1.5-litre petrol engine is up 7bhp to 119bhp, and Honda has swapped the nickel-metal hydride battery pack for a lithium-ion version that helps take combined power to 135bhp – a 13bhp hike.

However, the additional performance doesn't come at the expense of efficiency if you choose the Sport; it still averages 56.5mpg and emits 116g/km of CO2.

True, the GT is less efficient than before because it now gets bigger, 17-inch wheels, but it still manages 54.3mpg and 122g/km.

Visual changes over the old car are limited to a subtly restyled front bumper and grille, and new alloy wheel designs and colours.

Despite the extra power, the CR-Z drives much the same as before.

There are three main driving modes (Econ, Normal and Sport), which let you alter the responses of the throttle, steering, climate control and engine stop-start system to suit different conditions.

Changes in throttle response are particularly noticeable, with the engine feeling completely flat when you're in Econ, but offering nippy acceleration in Sport.

By contrast, the new S+ boost system – which can provide extra electrical power for up to 10 seconds at the push of a button – makes little difference.

The CR-Z remains at its best on twisty roads because its suspension keeps body roll to a minimum and the front-end responds to the tiniest tug on the wheel.

Unfortunately, this ultra-quick steering means the CR-Z feels nervous on the motorway, and there's so much road noise you'll have to crank up the stereo to drown it out.

The petrol engine gets loud when you rev it, too, but at least it isn't an unpleasant sound.

Meanwhile, the hybrid powertrain and engine stop-start system work smoothly and the gearshift is satisfyingly slick.

The cabin has a futuristic look, yet it's pretty easy to get to grips with because the cool, backlit dials display information clearly, and there are simple control pods just a short reach from the steering wheel.

The basic driving position is good, too, but the seats are short of adjustment and rear vision is awful because a bar cuts right across your line of sight.

Adults won't want to ride in the back for long because head- and legroom are extremely limited.

However, there's now some extra stowage space in the cabin thanks to redesigned door bins, while the decent-sized boot can be easily extended thanks to rear seats that fold completely flat.

Honda is no longer offering the entry-level S trim, while our favourite model – the Sport – now costs £1455 more than the pre-face-lift car.

That's still almost £1700 less than the cheapest Volkswagen Scirocco diesel, but the Scirocco will cost you less over three years thanks to its superior economy and residuals.

Factor in the Scirocco's superior refinement and practicality, and it's ultimately a much better buy.