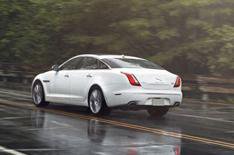 In America, more than half of saloon buyers want a V6 engine and four-wheel drive. That's been a problem for Jaguar, because until now it has sold only rear-wheel-drive V8s across the pond. Not anymore, though, because a new four-wheel-drive system has been developed for both the Jaguar XJ and XF, which is linked to the car maker's new supercharged V6 petrol engine.

Sending power to all four wheels has meant more than just the addition of propshafts and a transfer case. It's also required modifications to the steering and suspension, along with plenty of extra sound deadening.

The system runs in rear-wheel-drive mode in ideal conditions, but can transfer up to all of the engine's torque to the front wheels when loss of traction is detected.

It was mightily impressive, too. In conditions where a regular XJ wouldn't even have made it out of the car park, the AWD felt incredibly sure-footed on the slippery roads.

Admittedly that was partly due to the winter tyres our test car was fitted with, but the Jaguar was able to easily deal with snowy hill starts and slippery corners.

We spent most of the test drive in 'Winter' mode which by default sends 30% of the power to the front wheels and pulls away in second gear to minimise wheel spin because it gives the driver more confidence in treacherous conditions.

In 'Normal' and 'Dynamic' modes you feel the rear of the car start to break away if you're too eager with the accelerator in corners, but before you can react to correct the steering, the car's electronics have already responded and done if for you.

In other respects, the AWD model feels identical to a regular XJ. The ride is firm compared with the pillowy feel of a Mercedes S-Class, but the Jag is far more agile and enjoyable to drive quickly.

What's the Jaguar XJ AWD like inside?
The same as any other Jaguar XJ. The lavish veneers, old-school bull's-eye air vents, and ebony and chrome detailing punch home the old-money message.

There's plenty of room in the front, but things aren't quite so impressive in the back, because although you sit very low, the sloping roofline eats into headroom.

Should I buy one?
Jaguar has no plans to sell four-wheel-drive versions of its current models in the UK.

However, it's likely that future generations of Jaguar saloons will be available with four-wheel drive here as well as abroad.

2020 Jaguar XJ electric car: what we know so far