* First sketch of sporty Kia Proceed * 200bhp Proceed GT due next summer * Car will be launched at Geneva motor show... 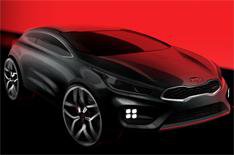 This is the first sketch of the Kia Proceed GT, a hot hatch that will be unveiled at the 2012 Geneva motor show in March before going on sale in July.

The Proceed GT is based on the new three-door Proceed that was launched at the Paris motor show earlier this year.

It will use a version of the 1.6-litre turbocharged petrol engine that's used in the Hyundai Veloster Turbo. While few technical details have been released, we'd expect the car to have a power output of around 200bhp. A 0-62mph time of around 7.0 seconds is likely.

The car's chassis and suspension will be tweaked to give the Proceed GT a sportier driving experience than the standard Proceed, says Kia.

Prices have also yet to be confirmed, although the Proceed GT will be well-specced and is expected to cost around 22,000.