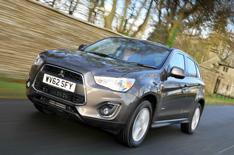 The 2013 Mitsubishi ASX is a face-lifted version of Mitsubishi's compact SUV. It gets a subtle cosmetic update, with new bumpers on the outside and some fresh materials and trim inside.

On four-wheel-drive models, a new push-button replaces the previous rotary controller for selecting four-wheel drive, while changes to the rear suspension are aimed at improving the car's ride and handling.

There are no changes to the engines, so there's a choice of a 1.6-litre petrol or a 1.8-litre diesel. Front-wheel drive is standard for petrol models and the diesel is available with either front- or four-wheel drive.

What's the 2013 Mitsubishi ASX like to drive?
We were hard pressed to notice the changes to the ASX's suspension, but that's no bad thing. As with the outgoing car, the ASX is reasonably good to drive, with a decent balance between comfort and control.

It's certainly not the sportiest car in its class to drive, but the ASX handles and grips well enough. The steering is rather slow to respond, but you can say the same of rivals, such as the Kia Sportage.

Ride comfort is generally good, although body movement isn't that well controlled, so there's some lurching over bigger bumps and through corners.

We drove a four-wheel drive 1.8 DiD diesel version. The 114bhp engine is pleasantly keen to rev, and although it's rattly when worked hard, it's not intrusively loud on the motorway.

Performance is adequate rather than impressive and you can say much the same about the ASX's overall refinement.

The changes brighten up the cabin, but it remains rather dark. Quality is good, however there are lots of appealing soft-touch plastics and the fit and finish are decent throughout.

Cabin space is impressive for such a compact car, too, with plenty of space for four adults and a useful 442-litre boot.

Should I buy one?
The entry-level 1.6-litre petrol model costs 16,499 and comes with a decent amount of standard kit, while the cheapest diesel version costs 20,599. Four-wheel-drive versions start from 22,749.

That means the ASX costs around the same as (or slightly less than) an equivalent Nissan Qashqai, although it gets nowhere near the Qashqai 1.6 dCi's fuel economy or CO2 emissions figures.

Overall, the Qashqai is a better all-rounder. If you're considering a top-spec ASX, we'd suggest looking instead at a Mazda CX-5.

The updated ASX isn't a bad car, and it's slightly more appealing than before, but it remains an also-ran.