The BMW M4 has been shown in concept car form at the Concours d'Elegance at Pebble Beach in California.

Its bonnet has a hump over the engine that's familiar from previous M cars, while the larger front grille is reminiscent of that found on the M6 coupe. The redesigned front splitter is one of several parts made purely from carbonfibre.

Elsewhere, the Concept M4 Coupe features carbonfibre on the roof and rear diffuser.

Larger wheelarches, an integrated rear spoiler lip, two pairs of carbonfibre tailpipes and 20-inch lightweight alloys all further differentiate the M from the rest of the 4 Series range.

BMW has not revealed any information about the M4's engine, but it is expected to feature a turbocharged 3.0-litre straight-six unit when it goes on sale.

The production version of the M4 is likely to be revealed in December, ahead of a public debut at the Detroit motor show in January. It is set to go on sale in May, and will be launched at the same time as the four-door M3 saloon.

A convertible 4 Series is expected to make its debut at the LA motor show later this year, before going on sale in March 2014. An M4 Cabriolet will follow towards the end of 2014. 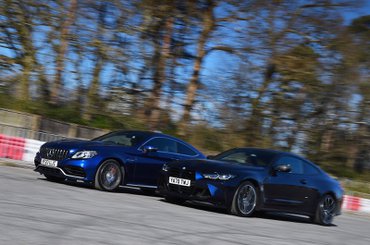 The M4 is a new range-topping version of our reigning Coupé of the Year, but is it better than its arch-rival from Mercedes' AMG performance division