Big cities have been crying out for a tiny car that's nimble and easy to park. Luckily, Smart has finally got around to making an new version of its Fortwo. Here's our verdict... 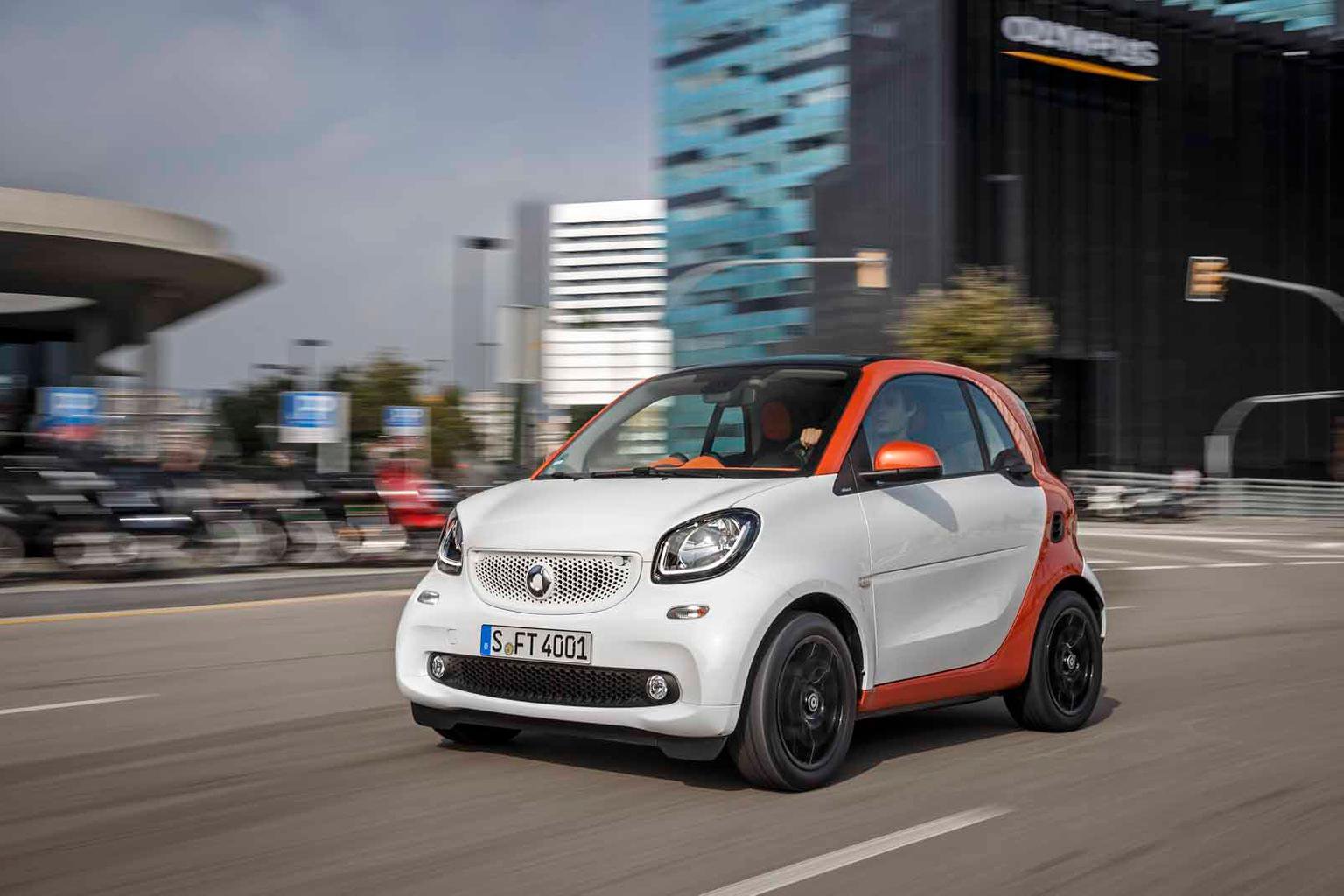 Size really does matter. Especially when it comes to city cars. That’s why, despite a total redesign, a new chassis platform and a much wider cabin, the third-generation of Smart Fortwo is exactly the same length as its compact predecessor.

That should make it one of the easiest cars to manoeuvre this side of rivals such as the Toyota iQ, and therefore perfect for anyone who regularly finds themselves fighting it out for parking space in congested town centres. Dinky dimensions are not the only selling point though; Smart claims it has made big improvements to ride comfort and stability, on-board practicality and active safety.

There are two three-cylinder petrol engines available from launch, which are shared with the new Renault Twingo – one with a turbocharger and a larger 1.0-litre motor without. Both engines come with five-speed manual gearboxes as standard, but a dual-clutch automatic will be available for the first time in the spring, as a £995 optional extra.

There are three trims levels to pick from, too, dubbed Passion, Prime and Proxy, with prices starting at a fairly lofty £11,125 for the Passion with the less powerful, naturally aspirated engine.

Perfectly suited to navigating the confines of any major city; a class-leading turning circle of just 6.95 metres means the new Smart can perform U-turns in the narrowest of gaps.

It does feels like a bigger car than its predecessor, though. The extra 10cm of width in the cabin has had a real impact on the amount of space available, but you can’t really exploit the Fortwo’s size to help beat the traffic like you could before.

This wide stance does bring major handling benefits. Compared with its bouncy, rock-hard predecessor, this Smart now feels a lot more stable and planted in corners, or when tackling a bumpy, uneven stretch of road at higher speeds.

There’s quite a big difference in performance between the two engines, and the turbocharged model is a full four seconds quicker to reach 62mph than the 1.0-litre version. It feels considerably more urgent around town, too, with sharper throttle responses and enough shove in-gear to deal with the cut-and-thrust of a hectic rush-hour commute.

However, as with the Twingo, the 0.9-litre engine has a rather vague clutch pedal and a high biting point, which make it difficult to drive smoothly at low speeds – hardly an ideal trait in a car that is likely to spend most of its life darting around town.

The 1.0-litre model certainly needs working harder to make decent forward progress, and while it's fine for town use and from anywhere between 20mph and 40mph, it emits a distinct three-cylinder thrum that gets a little strained at higher revs. Still, the throttle and clutch response make it easier to drive smoothly, and it’s usefully cheaper than the turbo (by around £700), so Smart expects it to be the most popular edition.

All Smarts (both the Fortwo and Forfour) come with a variable-ratio steering rack, which changes the amount of effort required depending on your speed. It’s precise enough to make it easy to place the Fortwo accurately on the road, but slow and very light, so you often end up needing to add extra steering lock mid-corner to get it round the tightest bends. Rivals such as the Skoda Citigo feel a lot more agile, with less body roll and more natural steering.

Ride and refinement are the two areas that could still leave room for improvement. While there is no denying that the latest Smart is a giant leap on from the old car, it is not quite up there with the best in class. Dip a wheel into a pothole and a large thump is sent through the cabin, and wind and road noise are both noticeable at high speed.

The five-speed gearbox is also a little notchy and imprecise, requiring a careful hand to operate smoothly. We had a brief go in the optional dual-clutch auto version, which was impressive. Leave it in auto and it keeps the revs under control, doesn’t hold on to gears too long and shifts quickly through its six speeds. Manual mode is not quite as effective, but the software is still being tweaked before it goes on sale.

As the name implies, there is still only space for a driver and one passenger on board. However these two people are given quite a lot more room than you got before. The added width means even the very tall or very broad will now fit comfortably inside.

The driving position isn't great, though, with a high clutch rest, and minimal adjustment that makes it hard to find the perfect position. The seats are set quite high too, and height adjustment for the seat and steering wheel is a £295 extra, and available only as part of a Comfort pack.

Forward visibility is great, and the snub-nosed bonnet makes it easy to judge where the limits of the car are, but the thick rear pillars and small back window mean there are some quite serious over-the-shoulder blind spots, making the door mirrors essential.

A leather-covered multi-function steering wheel is standard across the range, and it’s a nice chunky thing with a high-quality feel, but the rest of the cabin is more of a mixed bag. Bright, textured fabric covers most of the dash, and there are some gloss plastics on the air vents and climate controls, but hard, low-grade materials in the doors and on the transmission tunnel make it obvious the Smart has been built down to a price.

The optional clock/rev counter that sprouts from the dash next to the driver feels especially flimsy, but there are clever touches, too. The glovebox is quite small and an awkward shape, but there is a handy storage tray below the gearstick for loose items.

Opening the boot is a two-stage process, with a glass hatch you can pop out when you want to quickly drop something small in the back, or a split metal tailgate that folds out if you need to fit more inside. However, it's a small area overall, and no more than a couple of flight cases will squeeze in behind the two seats because the engine sits below the load bay.

The premium pricing puts the Fortwo toe-to-toe with top-spec city cars such as the VW High Up and Hyundai i10 Premium, but you do get a lot of kit for your money. Kicking the range off is the Passion trim, which comes with 15-inch alloys, climate control, a multi-function leather steering wheel and a bright 3.5-inch colour screen plonked right into the middle of the speedo, and cruise control.

Step up to either the Passion or the Proxy (they cost exactly the same £695 premium) and you’ll get a load of extra luxury goodies. Passion models have a glass sunroof, lane-keep assist, extra instruments, a fabric dash and heated leather seats.

There are some telling omissions in the spec list, though. For example, If you want a plastic cradle to house your smartphone (which forms a key part of the standard infotainment system through an app that controls the Bluetooth, radio and other key functions) it’s a £55 option - on what is already an expensive car.

We think the Premium Pack (£795), which includes rear parking sensors, a height-adjustable driver’s seat, electric mirrors and a 7.0-inch touch-screen with navigation, enhanced infotainment features and full European mapping will be an essential extra, too.

The Smart Fortwo has undergone some radical changes, but its appeal remains the same. If all you need is two seats, a small boot and a city runabout, then it’s a fine alternative to the Toyota iQ and certainly a lot more recommendable than before.

However, if you have no need of its party-piece turning circle or the ability to park nose-in to the kerb (where permitted), then it’s a lot less practical (not to mention more expensive) than conventional three-door city cars such as the Skoda Citigo and Hyundai i10.

Both of these rivals are rather conservative, but will be almost as cheap to run for a private buyer, and come with more equipment as standard. If you add on all the necessary equipment then the Fortwo will cost at least £12,000, which is a lot of money for a car that never quite feels like a polished premium product.