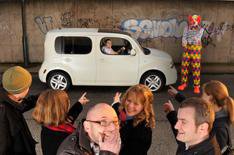 We'd all like the world to be a happier place. Thats a big part of the reason why so many of us buy super-efficient green cars. Theres another way, though. How about a car that actually elicits smiles from people as it drives past?

Cue the Cube. Theres something about the Nissan that, over the time weve had it, has really tickled peoples chuckle muscles. Everywhere it went, pedestrians would stop and stare, while other motorists would gawp in disbelief. Then immediately afterwards every one of them would smile. Then smirk. Then laugh.

Laughing with me or at me?
It started happening from day one, when I collected the car from WLMG Nissan in Slough (0845 811 0353). In fact, I couldnt help smiling myself when I first clapped eyes on the Cube the mix of boxy shape, asymmetrical styling and bold detailing gave exactly the unconventional, in-your-face effect that I look for in a car.

Then, when I left the dealership, Id gone literally 200 yards down the road before some chap in a Ford Mondeo drew up next me at a set of traffic lights, took one look at the Cube and burst into fits. I didnt know it then, but this was going to happen on a daily basis.

It quickly became clear that those doing the laughing didnt always share my enthusiasm for the Cubes styling. While I thought it was quirky and jolly, the man in the street found it awkward or just plain weird. They werent shy of telling me so, either. In other words, all those people were laughing at me, rather than with me. I could live with being a laughing stock, though, because I knew the Cube was a good car in lots of ways.

Down to business
My Kaizen-trimmed model had loads of standard equipment. Climate control, keyless entry, automatic lights and wipers, cruise control, a panoramic glass roof, privacy glass and alloy wheels were all provided, but the best thing was Nissan Connect. Its a system that combines Bluetooth phone connection, reversing camera and sat-nav in one unit, and the simple touch-screen menus made it a doddle to use on every journey I made in the Cube.

Stability control and six airbags were standard issue, too, which gave me peace of mind about safety, while the Nissan badge helped me sleep better at night.

Nissans superb reputation for niggle-free motoring was once again justified in our most recent Reliability Survey (What Car?, August 2010), in which it finished a respectable seventh out of the 32 car makers studied.

Perhaps the Cubes biggest advantage, though, was the enormous cabin. The high roofline allowed for lots of headroom in all five seats, and no one struggled for legroom, either there was loads up front and, if I shifted the sliding rear seat back as far as it would go, rear-seat passengers got lots as well. The boot was a good size, too, ranging from 255 litres to 403 litres depending on the rear bench.

Unfortunately, positives didnt extend to the Cubes practicality. The boot had an enormous lip to load items over, and the side-hinged tailgate was tricky to open, especially if I reversed into a parking space.

Ivan was disgruntled that a large boot lip made loading heavy items difficultThe way the rear seat folded also robbed me of some versatility the backrest simply flopped down onto the base, leaving a gigantic step in the boot floor. This meant that some bulkier items didnt fit. For instance, looking at the Cubes boxy shape, youd think it would swallow a mountain bike easily, but the step meant colleague Will Nightingale had to take off the front wheel first.

If only the folded rear seat had the ability to tumble forwards, his bike would have been able to travel intact.

Thats not our only grumble about the boot: it had a strange fabric load cover that was lashed to the sides with bits of elastic it all felt a bit low-rent.