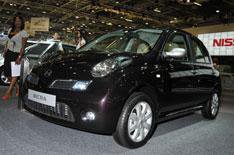 New Murano
The revamped Murano range is also show, before going on sale towards the end of this year.

Although it looks much like the previous car, the car has a new chassis, updated styling and an upgraded interior.

Its 3.5-litre V6 petrol engine and continuously variable (CVT) automatic gearbox have been revised, too, and the suspension has been altered to improve ride and handling.

Note Acenta S
Already on sale, the special-edition Note Acenta S is being heavily promoted at the show.

Costing 400 more than the Acenta, extra features include climate control, automatic headlamps and wipers, and a six-CD player with MP3 connectivity.

There's also an intelligent key system, which automatically locks the car as you leave it and unlocks it as you approach it.

GT-R
Nissan's GT-R supercar is here, too. It's been around so long now it hardly feels like a new car, although deliveries won't begin in the UK until March next year.

More than 1000 have already been ordered, and you'll understand why after a quick peek at the performance figures.

The engine line-up includes a choice of 1.2- and 1.4-litre petrols and a 1.5-litre diesel. A 1.6-litre petrol engine is available on the Micra C+C coupe-convertible.

Audio controls on the steering wheel and iPod connectivity will be standard, as well as an engraved 4Gb iPod nano.

The car is available in a new colour called Nightshade, which is a deep purple. It's the only Nissan that will be available in this colour.

Other styling features include silver-effect door mirrors, handles and body mouldings, rear privacy glass and a choice of new wheel trims. A '25' logo is located on the rear door.

Phew, with all that metal to show off, those folks at Nissan have been busy. Let's hope they remembered to bring the industrial-sized tub of car polish.