Nissan's Cube to be sold in Europe 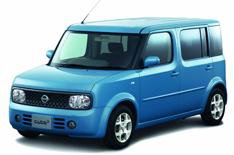 Nissan will sell the next-generation Cube - a stylish, boxy, small car based on the Nissan Micra platform - in Europe.

The current Cube is sold only in Japan, but Nissan's CEO Carlos Ghosn has confirmed that reaction to the car has been better than expected and that its next generation 'will be seen in many markets'.

The Cube is powered by a 105bhp 1.5-litre petrol engine and features an automatic CVT gearbox. It is just over 3.7 metres long, but 1.6 metres high, making it practical and roomy.

A seven-seat version is also sold in Japan, and an electric model, as seen at the Los Angeles motor show last November, is also likely to reach production.

With the current trend for practical but fashionable and fuel-efficient cars, the Cube is likely to have a strong future.

The present-generation model is six years old, so a replacement is not expected until 2009. That means a European-engineered Cube would probably arrive in 2010.