* 188mpg Audi A3 E-tron revealed * Will be on display at Geneva motor show * VW Golf plug-in hybrid to follow... 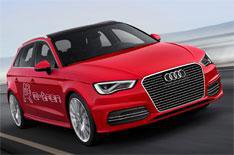 A plug-in hybrid version of the Audi A3 will be revealed at the Geneva motor show next month.

The Toyota Prius-rivalling hatchback, which goes on sale next year, pairs a 1.4-litre 148bhp petrol engine with an electric motor to produce a combined output of 201bhp. The A3 E-tron can run on electric power alone for 30 miles or just the petrol engine, but in most conditions it will draw power from both sources.

Audi's head of development, Wolfgang Durheimer, claims the Audi A3 E-tron will be extremely efficient, with average economy of 188mpg and CO2 emissions of just 35g/km. It will sprint from 0-62mph in 7.6 seconds and go on to 139mph.

The A3 E-tron will spark a host of new plug-in hybrid models from the VW Group. Durheimer said: 'It's the breakthrough technology that VW will place its bets on in the future. It gives customers the benefit of electric technology without any mobility constraints.'

A plug-in hybrid VW Golf, with identical technology, will follow shortly after the Audi. VW Group engineering boss Ulrich Hackenburg has also promised that a plug-in Up will go on sale, using the same powertrain as VW's high-tech XL1, which has just been confirmed for production.

Elsewhere in the VW Group, Bentley is known to be working on plug-in hybrid technology for its Continental and Mulsanne models, using V8 petrol engines and electric motors. Porsche, too, is likely to use a similar system for the next-generation Cayenne and Panamera.