Audi A8 hybrid set for UK 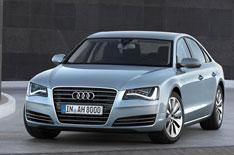 Audi will launch an A8 Hybrid towards the end of next year.

The flagship limousine will be powered by a 2.0-litre four-cylinder petrol engine and a 40kW electric motor to give a combined power output of 242bhp. It will come mated to an eight-speed tiptronic gearbox.

The electric motor is charged by a lithium-ion battery pack in the car's boot.

The A8 Hybrid will get styling touches to mark it out from the rest of the range including alloy wheels with spokes 'reminiscent of turbine blades' and hybrid badges on the bodywork.

There is no indication on prices as yet, but we expect the A8 Hybrid to cost around 60,000.