Audi has just revealed new photos of its Q3 crossover that we've just driven. Have a look at them here.

The Q3 is slightly longer than the current A3 and is almost as tall as the Q5 making it a premium rival for cars such as the Mini Countryman and Range Rover Evoque.

The sloped roofline also gives the Q3 the sleek profile of a coupe, while boot space of 460 litres gives it the added element of practicality desired by families.

There will be four 2.0-litre engines available from launch: two petrols and two diesels. Power ranges from 138bhp with the 2.0 TDI 140 up to 208bhp in the 2.0 TFSI 211 unit. The lower-powered petrol and diesel get two-wheel drive and a six-speed manual gearbox as standard. The other two engines will come with Audis quattro four-wheel-drive system and S tronic seven-speed semi-auto transmission.

Standard equipment includes alloy wheels, air-conditioning, and an MP3 connection, while cost options range from a storage package and climate control to a panoramic sunroof and heated electric seats. 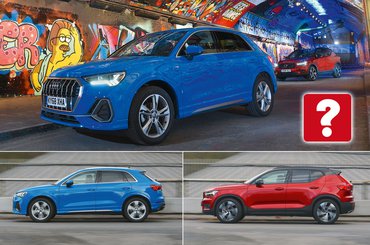 The XC40 is our favourite family SUV and a former What Car? car of the Year, but is Audi's all-new Q3 even better?