More for you |
The most reliable family cars on sale - and the leastBest plug-in hybrid: BMW 330e vs BMW 530eThe best SUV dealsCar sales down 89% year on year in MayBest used city cars for less than £2000 (and the ones to avoid)
Home
Feature
Audi TT Roadster vs Mercedes-Benz SLC
feature

Are a new name and a thorough refresh enough for the Mercedes-Benz SLC to take the lead from Audi's drop-top TT?... 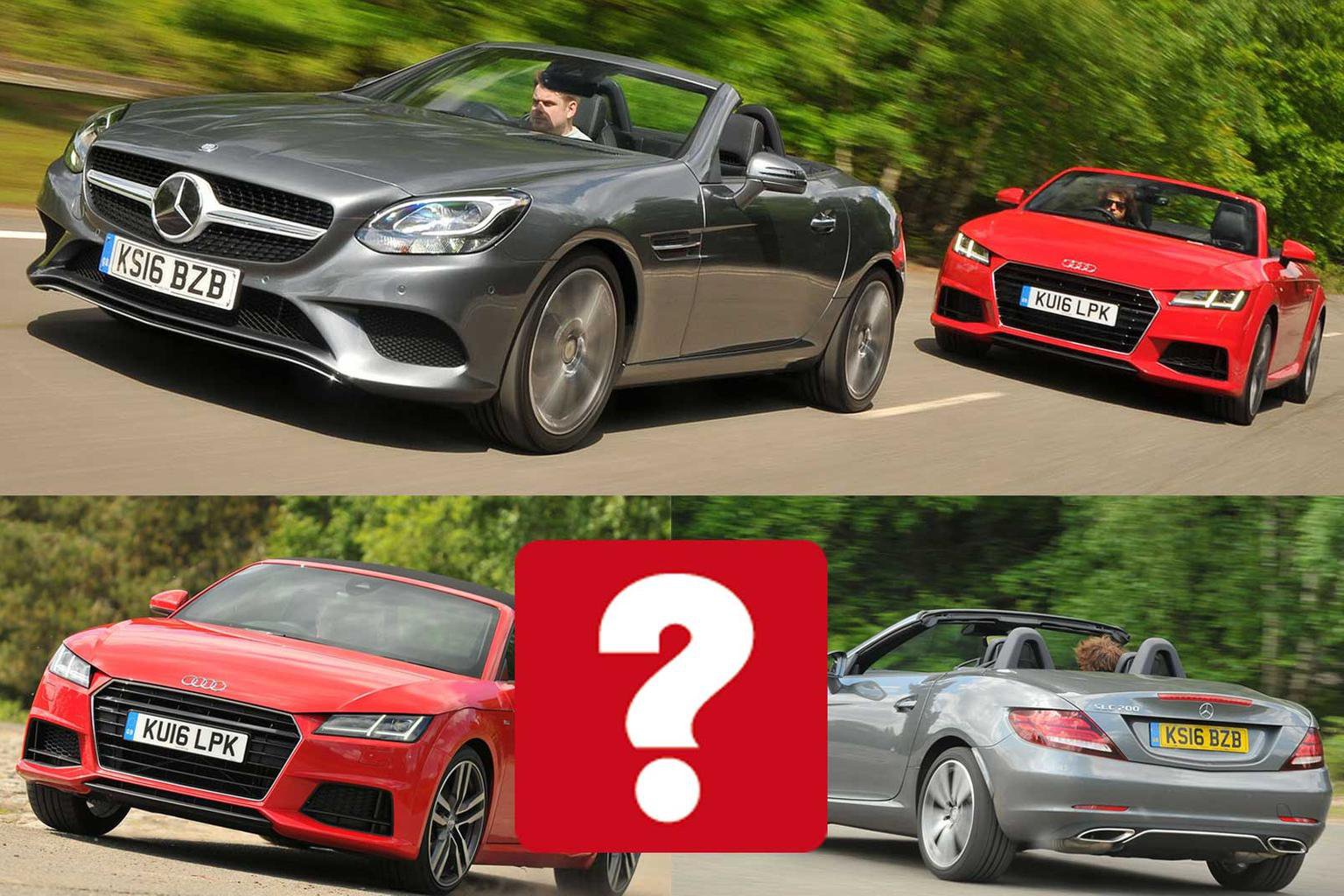 It's quick, great to drive and easy to live with, which is why it’s one of our favourite drop-tops.

Essentially a tweaked SLK, but the new SLC promises improved performance and handling.

Summer’s here, and what better way to enjoy it than with a shiny new two-seater drop-top? The new Mercedes-Benz SLC certainly looks an appealing choice. It’s effectively a revised version of the SLK, with a few styling and mechanical tweaks, such as a new nine-speed automatic gearbox. It could prove a tempting package, especially in frugal SLC 200 form.

We’ve lined it up against Audi's TT Roadster. It’s a cracking car to drive in 2.0 TFSI Sport form, and it’s reasonably practical and has sensible running costs. So, does the refreshed Mercedes have what it takes to beat the TT?

The SLC’s 2.0-litre petrol engine is gutsy enough. Acceleration starts to pick up from around 1700rpm, although it never really excites. The TT is much faster. Its 2.0-litre motor doesn’t come on song until around 2000rpm, but from then on it’s punchier and shows the Mercedes a clean pair of heels.

So, despite the rear-wheel-drive Mercedes having better traction away from the line, the front-wheel-drive Audi still races from 0-60mph in an impressive 6.3sec – 0.8sec quicker than its rival. It’s also better at overtaking, clocking a 2.0sec advantage from 30-70mph.

We’re testing both cars with optional automatic gearboxes. While the SLC’s has the advantage of nine gears to the TT’s six, the Audi reacts more quickly when you press the accelerator and it produces snappier changes thereafter. The SLC’s gearbox is a touch more lethargic by comparison, although both cars shift smoothly when you’re just mooching about.

In theory, the SLC’s rear-wheel-drive layout should serve up more playful handling, but the reality is somewhat different. It’s less planted than its rival on rougher roads, hopping over mid-corner bumps that the TT rides with ease, and the SLC’s steering also offers little feedback on how well the front wheels are gripping the road. The SLC can also feel quite keen to swap ends if you’re too eager with the accelerator pedal on damp roads, although the stability control system always cuts in to prevent this from happening. Put simply, the SLC is a car best enjoyed at a more leisurely pace. 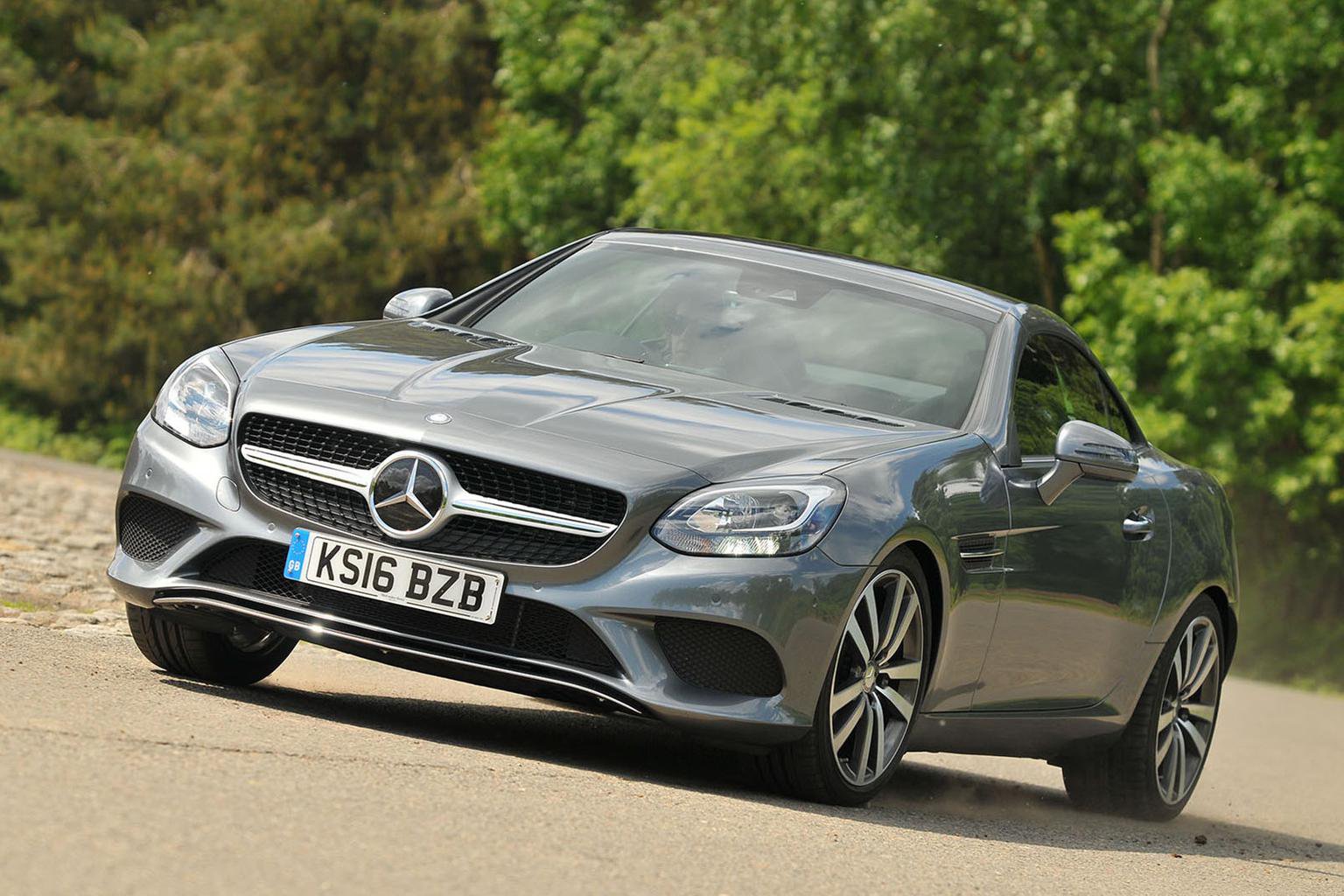 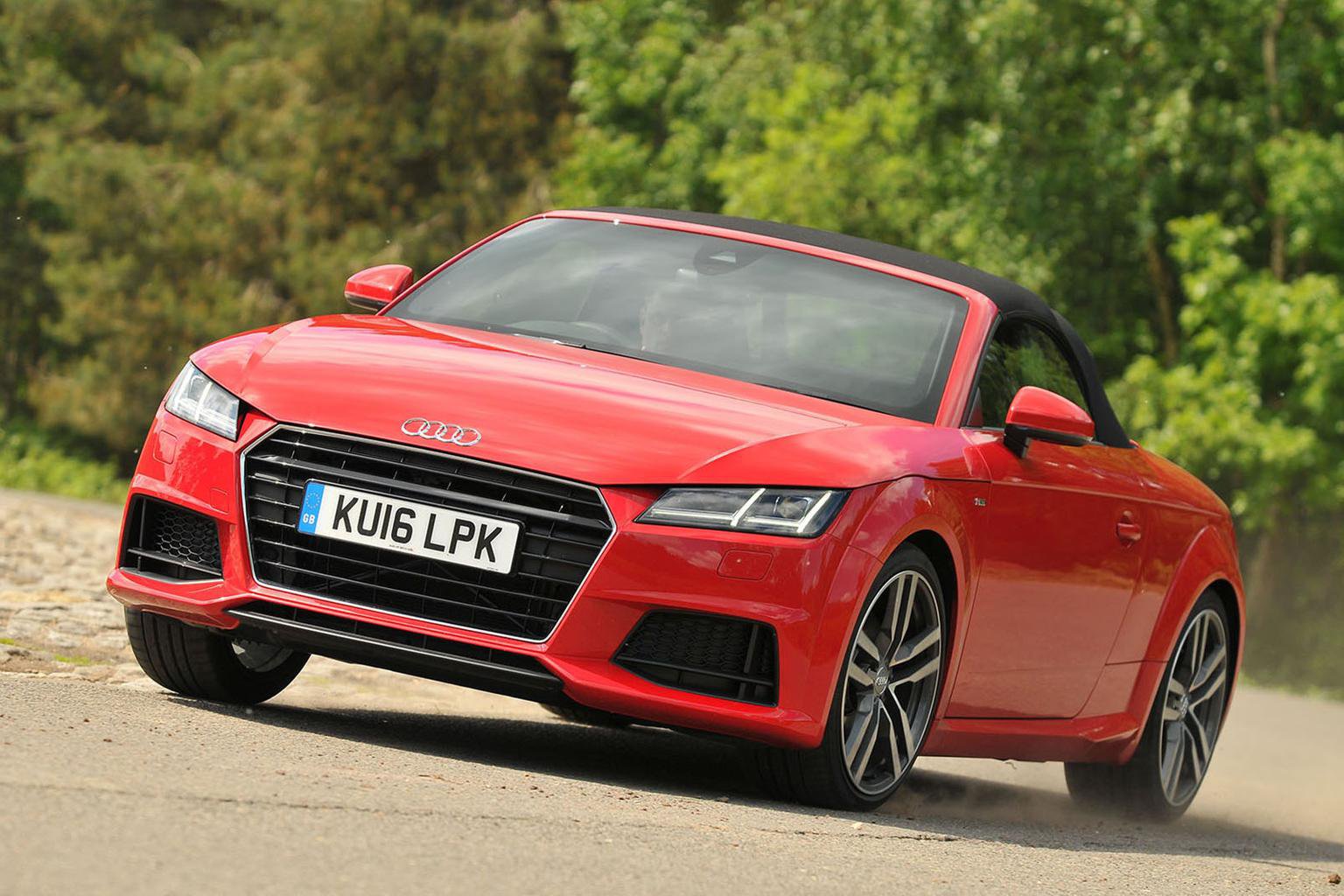 In contrast, the TT eggs you on. There’s much more grip so you can carry much more speed in to corners, and as you turn in, its steering weights up with greater consistency than the SLC’s, filling you with confidence. There’s also less body lean, and when you do finally reach the TT’s limits the steering quickly streams that information to your fingertips. Simply backing off the accelerator pedal brings everything neatly back in to line. The TT also has stronger brakes and its firmer brake pedal is more confidence-inspiring.

Although both cars have a stiff ride, the SLC is slightly less fidgety over lightly rippled roads. However, when the surface gets really craggy the TT – even with our test car’s stiffer S line suspension and larger 18in wheels – does a better job of taking the edge off sharp potholes, and its more rigid chassis allows less shuddering to be transmitted through the car’s body.

While the SLC’s engine is quite smooth, it sounds decidedly ordinary for a sports car. Put your foot down in the TT and you get a sportier exhaust note accompanied by loud barks between gear changes that add an extra degree of excitement. When you’re cruising on the motorway, the SLC’s folding metal roof is better at keeping road noise out of the cabin than the TT’s canvas hood, but there’s more wind noise in the Mercedes.

When you want alfresco fun, the SLC’s clever but complicated electric roof takes 20sec to fold down – twice as long as the TT’s. Both are accomplished open-topped >> cruisers that keep you largely bluster free at motorway speeds, as long as you have their wind deflectors in place. As standard you get a slot-in fabric deflector on the SLC. The TT’s is more elaborate and can be raised or lowered electrically at the touch of a button, but it’s a pricey £425 option.