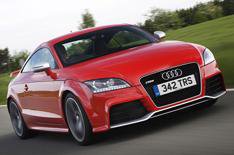 Any car with the letters 'RS' after the first name 'Audi' is pretty much off to a good start, because there's barely been a duff Audi RS yet. Think RS2, RS4 and the current RS6 and youll know what we mean.

So the Audi TTRS has been born into a family with a fabled reputation, which means it has a lot to live up to.

Turn the key and thing gets off to a good start, if you'll pardon the pun. Under the bonnet is a 2.5-litre five-cylinder turbocharged engine developing 335bhp and it delivers a soundtrack to rekindle all those memories of fire-spitting Audi Quattros bellowing along the world's rally stages.

Squeeze the throttle pedal into the carpet and as far as everyone else if concerned, you and your TTRS will be bidding them TTFN as you scorch off into the distance. The TTRS will hit 62mph from rest in just 4.6 seconds, two-tenths faster than a V8-engined Audi R8 supercar rapid indeed. Itll hit 174mph, too. So far, so good, so straight.

Things aren't quite so good around corners, though. The steering feels oddly inert, telling you little about the road surface, while the firm suspension feels as though its fighting the road surface rather than working with it.

That's why we'd keeping walking past our Audi dealer and head to the Porsche outlet down the road. Rapid as the TTRS is, it doesnt offer nearly the interaction and sheer pleasure of a 1387-more-expensive Cayman S, which is why, unfortunately, the TTRS doesnt quite live up to the reputation of its illustrious forebears.

Audi TTRSPrice from 42,985
On sale Now
You'll like Sheer speed, soundtrack
You won't Firm ride; not exactly fun
Verdict: Extremely rapid, albeit without the thrill