More for you |
Electric car waiting times revealedCoronavirus advice: How do I renew my car's tax if its MOT has expired? Best small cars 2020Past Master: Audi TT Mk1Coronavirus advice: how to contact What Car?
Home
News
Beijing 2012: Ferrari hybrid system
news 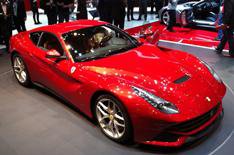 Ferrari is revealing the latest version of its hybrid powertrain at the 2012 Beijing motor show.

Ferrari has previously shown a prototype front-engined version in the Ferrari 599, but the system that makes its debut at Beijing has a mid-engined layout. It is likely to be destined for the next Enzo supercar.

The petrol-electric hybrid system, called Hy-Kers, uses a 12-cylinder engine and a pair of electric motors. One of these motors is connected to the double-clutch gearbox, while the second powers the rest of the auxiliary systems, thereby reducing the strain on the engine.

Ferrari says that the engine borrows technology from the companys F1 arm, and the finished version should be able to increase performance by 10% and improve emissions and efficiency by as much as 40%.

The Ferrari F12 Berlinetta will be the other main attraction on the Ferrari Beijing standard. It was revealed at the 2012 Geneva motor show and is expected to cost around 220,000. The first cars will head to customers in late 2012.

Thanks to a high-tech construction that includes 12 types of alloy, the F12 Berlinetta is 70kg lighter than the 599 it replaces. It also comes with carbon-ceramic brakes, an adjustable stability control and differential set-up and brake cooling ducts that open at higher temperatures to improve drag resistance.