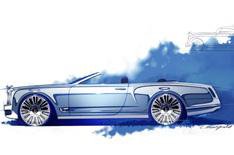 A Bentley Mulsanne convertible concept car has been revealed at a private function at the Concours dElegance in Pebble Beach, California.

The droptop Mulsanne was displayed to a small group of potential Bentley customers at the exclusive American show.

The Mulsanne Convertible Concept is a four-seater, and claims to offer a spacious yet intimate cabin for its passengers.

There are no pictures of the Mulsanne convertible beyond a few sketches, but it retains the muscular styling of the saloon version. It is also expected to come with the same 6.8-litre V8 engine as the saloon, which would give it an acceleration time of just over five seconds.

The addition of the folding roof is also likely to increase the Mulsannes 2585kg weight. It will also likely add at least 25,000 to the 225,900 price.

Although Bentley says the car is just a concept for now, the companys chairman and chief executive, Wolfgang Duerheimer, has implied that the car will make it to production form soon.

The Convertible Concept will extend the appeal of the Mulsanne family, while enhancing the profile of the Bentley brand, particularly in new and emerging markets, he said.